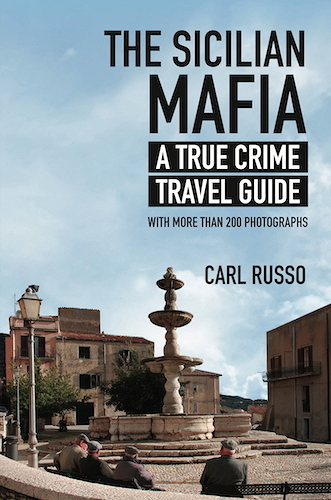 Here at We Said Go Travel, we love books! Enjoy an excerpt from  THE SICILIAN MAFIA: A TRUE CRIME TRAVEL GUIDE and be transported to Sicily!

A unusual new travel guide to Sicily becomes an illustrated journey to the heart of the Maﬁa. In The Sicilian Maﬁa: A True Crime Travel Guide, San Francisco author Carl Russo takes the reader to key landmarks in the history of Cosa Nostra: where the murders happened, where the godfathers lived, and where their victims are buried. The book’s 200 photographs were the result of Russo’s undercover work in Sicily over the course of six years.

Written for tourists and armchair travelers alike, the book is a geographical history of the Maﬁa on the Italian island of Sicily, the picturesque birthplace of organized crime. The guidebook, the ﬁrst of its kind in any language, is an adventure for anyone interested in unique travel, Italian history, or the annals.

From the sunbaked ﬁshing villages of the Mediterranean to the darkest alleys of Palermo, western Sicily is the exotic background for disturbing tales of murder and mayhem. Here is an excerpt from Russo’s introduction:

The purpose of this book is not to provide the traveler with tips on ﬁnding a cheap hotel or a fabulous restaurant. That information is already covered by a surfeit of travel books, websites and mobile applications. This guide is written for the adventurer interested in going beyond Sicily’s amazing beaches, churches and museums. The crime buff in everyone is given a closeup view of the mysteries and savageries of Sicily’s tragic past—and its hopeful future. As much as this book is a traveler’s companion, it is also for the armchair voyager who may never set foot on Sicily’s shores. The stories and images are presented geographically and may be read from start to ﬁnish, as narrative strains overlap and crisscross in time.

My focus is on the western half of the island, the true heart of the Sicilian Maﬁa. The archetypes of the village godfather, the estate enforcer, the racketeer and the hit man all have their origins in the cities of Palermo, Corleone and the surrounding country. From this rustic landscape rose the world’s most infamous crime bosses, whose militias were powerful enough to wage war on the Italian state. From the northwest ﬁshing villages and the land-locked sulphur towns came the gangsters of the American and Canadian maﬁas—household names to this day. The bloodiest, most tragic and literally earth-shaking events in the history of Cosa Nostra took place in the provinces explored in these pages: Palermo, Trapani, Agrigento and a portion of Caltanissetta.

This book divides western Sicily into three large sections: the metropolitan area of Palermo, Corleone and its surrounding towns and the coastal areas from Trapani to Agrigento. The numbered chapters represent car tours that may reasonably be taken in a single day. Reasonably, I posit, because car travel in Sicily is daunting even with the aid of a GPS device. Whether negotiating the manic trafﬁc of Palermo, with its ancient labyrinth of streets, or the impossible Escher-like conﬁguration of a hilltop village, much of Sicily remains uncharted by satellite street mapping. The addresses I include will, at best, only partially aid in GPS navigation. The best roadmaps are deﬁcient—no great pity as many city streets and country roads lack signs or even a name. Let the spirit of adventure triumph over frustration.

The wisdom of traveling to some of the more trouble-plagued areas, particularly Palermo, is to be questioned, and rightfully so. It is unlikely that a typical tourist willingly strolls the grim halls of the ZEN housing projects or cares very much to see the modern Pagliarelli prison complex. In that sense, I’ve already made the journey and taken the photos so you don’t have to. But to the irrepressible crime aﬁcionado, these places are an essential part of the story, and some may seek them out. As in any big city, tourists should take precautions against petty crime. Purse snatches and muggings are not uncommon in Palermo and Agrigento. Your set of street smarts should be based on a few simple rules: conceal your money, stow your camera when not in use, avoid sketchy streets after dark and have an awareness of your surroundings.

My two guiding principles while “trespassing” on historical Maﬁa territory are discretion and respect. The emotional and ethical aspects of “Maﬁa tourism” come into play especially in the small villages of the interior. Almost invariably, the families of both Maﬁa antagonists and victims still live there. Some very awful things happened in these places and the memories are still fresh wounds. The vast majority of Sicilians are honest, law-abiding and fun to meet, but it is rude and possibly dangerous to bring up the subject of the Maﬁa. Never disturb the occupants of the private homes listed in this book. Let courtesy and common sense prevail. Overall, tourists are greeted warmly by Sicilians and they are often quite curious about you. The smaller the village, the more stares you’ll receive. This should not unnerve you—a smile and a Buongiorno! will always be returned. Despite the language barrier, the old Sicilian-speaking pensioners of the piazza will never refuse a friendly handshake.

While I’ve dispensed with general travel advice, it should be noted that those who make the trek in spring will be rewarded with a dazzling display of wildﬂowers that cover entire hillsides in crimson, burgundy, yellow and white. The weather is pleasantly warm and the price of accommodation is reasonable. In the countryside, you’re never far from an agriturismo, usually a converted farmhouse or palazzo that offers lovely rooms and local cuisine for a fair price. Whenever possible, try to patronize businesses that refuse to pay the “pizzo”—extortion. The growing list of anti Maﬁa businesses may be found at addiopizzo.org/pizzofree.

The Sicilian Maﬁa: A True Crime Travel Guide ($18.95) is available in bookstores, on Amazon and from Strategic Media Books.

About the Author: Carl Russo is a San Francisco author who has written for the Oakland Tribune, indieWIRE and other publications. He was a radio producer and disc jockey at KUSF-FM for more than a decade. Russo fell in love with Sicily on his ﬁrst trip to the island in 1999 and has returned many times since.

Everyone leaves a little piece of their heart on St. John!
5 Must See Places to Visit in Portland this Summer
Searching for trams in Hong Kong
The Truth About Travel to Egypt