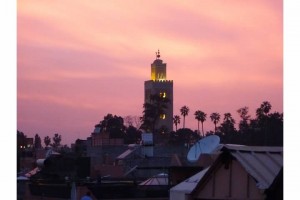 Since I was a youngster, I dreamed of one day visiting Morocco. Towns and cities with exotic names such as Rabat, Casablanca, and Fez beckoned me from across the Atlantic Ocean. In 2008 when I researched direct flights from Los Angeles to Casablanca, Marrakesh, and Rabat, I noticed that most flights went via either London or Madrid and cost well over $1,200usd in the budget economy range. My wife’s friend who had visited Morocco on two occasions informed us how we could save a substantial amount of money. Rather than purchasing a ticket through to Morocco, the key was to purchase a flight to nearby Madrid and then buy a Ryan Air flight to a desired locale in Morocco. With this information in hand, we saved literally hundreds of dollars and at the same time enjoyed two fruitful weekends in Madrid. The flight per person from Los Angles to Madrid cost roughly $600usd and the additional Ryan Air ticket added on only another $80usd per person; our total savings was over $1,000usd.

We arrived to Madrid where we spent the weekend roaming the city, visiting renowned museums such as the stunning Prado Museum and the Reina Sofia. We rested at the recommended Hostal Orly off Gran Vila with superb views of central Madrid at reasonably priced semi-budget rates. In Madrid we got over our jetlag so we could delve right into Morocco upon arrival. 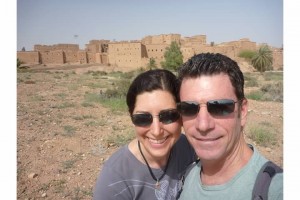 Our Ryan Air flight whisked us safely to Marrakesh where we lodged at the Jnane Mogador, a boutique converted Riad located just off Djamaa El Fna central square. On foot, we toured the Saadien Tombs near the Kasbah Mosque and the Palais Badii. After enjoying tasty local treats at the Kosy Bar, we roamed the Mellah (old Jewish Quarter) and were invited into a Synagogue on Rue Talmud Torah. That night we ate delicious Moroccan staple dishes: couscous, chicken tagine, bastilla (a filed pastry), and for dessert, sweet oranges peppered with cinnamon along Djamaa El Fna. The street food was fresh and tasty. Shopping in Marrakesh is tempting with a variety of Moroccan products from silver to carpets sold at the Gallerie Akabart El Hanafi Khalid and the Mouassine fhal Cheadmi near the Bougainvillea Café.

Our journey in Morocco next took us to the ancient seaside town of Essaouira with is walled medina constructed in the 18th century. Brief visits to the Oasis Flint, Ait Ben Haddou and the Todra Gorge were all worthwhile stops. Perhaps the highlight of our trip to Morocco was sleeping under the stars in a Bedouin camp outside of Merzouga as part of a two-day desert camel safari. Then we enjoyed the authenticity of Meknes and getting lost within Fez’s massive ancient medina. 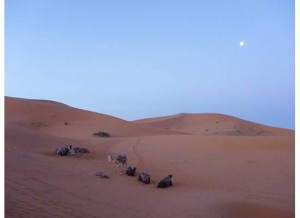 Why write now about our trip to Morocco when we went almost five years ago? We have been away for the entire 2013 year, mainly in Southeast Asia. Travelers often ask us for advice since we have been to the majority of locales that people intend to visit. They often ask us for tips; one of the best suggestions I give travelers heading to Morocco is to fly to Morocco via Madrid using Ryan Air’s services to save considerable amounts of money.

In addition to the drastic savings, we ended our holiday with a second weekend stopover in Madrid. However, this time we saw the capital city through the eyes of people from Madrid that we met at the Bedouin camp where we lodged in the Merzouga Desert. They took us out to wine bars to enjoy empanadas and other local delicacies. After a late night out, it wasn’t easy awakening to catch a flight home to Los Angeles but we had a fantastic trip.

About the Author: George Rajna, M.B.A., Masters of Science in Communications Disorders, is a bilingual speech therapist who has traveled to over one hundred countries across six continents. He composes music  on the guitar and ukulele, and spent two years working in rural education for Peace Corps Paraguay. He is the co-author of Traveling in Sin. He is a blogger for the Huffington Post, JewishJournal, Technorati, The Clymb and is in print at The Himalayan Times, George is also cofounder of We Said Go Travel and a member of the Travelers Century Club. His favorite region is Southeast Asia; in particular he recommends Bagan (Myanmar), Koh Lipe (Thailand), the Angkor Temples (Cambodia), Langzhong (China), diving in Sipadan (Malaysian Borneo), and trekking in Nepal. Since July 2012, George and Lisa have been living abroad in Southeast Asia. Learn more about We Said Go Travel,  Lisa and George at Wikipedia.

One response to “Saving Large to Morocco with Discount Airfare”