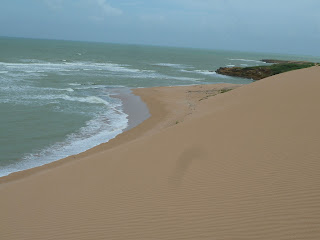 During our travels in Northern Colombia we left behind the city of Cartagena, the town of Santa Marta, and and the quickly growing fishing village known as Taganga, to get truly off the radar.  After a four hour drive from Santa Marta we arrived in Riohacha, a small coastal city that feels a little rough around the edges, a little bit like the last town of any significance for many miles because, well, because it is.  We checked into the Lonely Planet recommended Mi Cassona, a decent yet overpriced budget option and arranged a three-day, two-night tour to La Guajira with a local travel agency that can be contacted at turismoyelisgomez@hotmail.com.
The next morning we were off in a van with a Colombian couple from Bogota heading toward Cabo de la Vela.  The first half of our journey in distance was well paved as a lot of traffic heads into nearby Venezuela to trade goods.  The second half of the drive was literally a pain in the ass as we spent a good five hours maintaining a pathetic speed of 10-15 kilometers per hour due to the terrible road conditions, especially since Colombia had recently been hit by hard and constant rains.  We finally arrived to Cabo de la Vela around 4pm.  We were fed room temperature fried fish and plantains and then our “hosts”directed us to a beach thatch hut where they hung two hammocks that afforded us with great 180-degree ocean views.  I couldn’t help but think that despite the rustic conditions that we were in quite a romantic spot.  The coast here has a unique desert-like feel with serene yet murky waters.  Before the sunset, we went for a nice walk along the coast and had a relaxed dip in the ocean.  I definitely enjoyed the peacefulness of this remote piece of paradise. 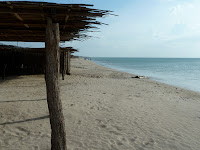 Later that night while we enjoyed a meal with our Colombian travel companions, I joked that two discos would be one direction and another disco the opposite direction of the one solitary dirt road that enters and leaves the fishing village.   Since we were off early the next morning, we tried to sleep early, already a challenge since neither my wife nor myself was accustomed to sleeping in a hammock.
Suddenly, after a brief dosing off period, my joke became reality.  Around 10pm loud music blared from both directions, as if competing with one another.  Sadly this went on all night along with vicious mosquito attacks.  Our romantic spot with two hammocks multiplied to over twenty, like a bunch of swinging sardines.  Finally, when the music died down, the roosters, barking dogs, and
passing trucks entered with supplies and all kept my sleep at a pathetic minimum.  And sadly the initial affinity that I had for Cabo de la Vela quickly faded to, “Let’s get the hell out of here!”  I simply couldn’t believe that this unique setting with the Wayuu people living in huts made in part from the heart of cactus living against the sea with rocky cliffs running down toward the beach, all surrounded by surreal desert, would be ruined by technology and tourism. 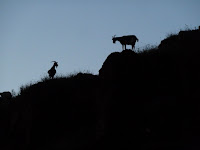 We departed in our van at 5:00am and drove to a small bay where we caught a fisherman’s boat to Punta Gallinas with a group of eleven people including ourselves, the two Colombians from Bogota, a family of three from Medellin, another couple from Belgium, and two other Americans. There was of course also the captain and his crew of two.  During our three hour journey to the island, our small boat was tossed around, seemingly not sea worthy for such a journey.  The Belgium guy, Ives became irate and stated, “This isn’t a vacation!  The Lonely Planet should be clear about how difficult this journey is.”  I couldn’t disagree with him but tried to console him with, “Well, maybe it will be worth it.  You never know until you go.” 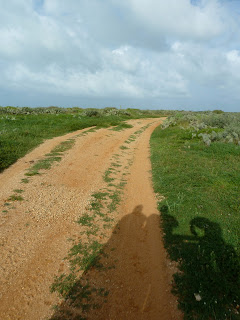 When we arrived I immediately knew we had reached a special location that rarely exists nowadays, save a few places in our world.  The area of Punta Gallinas felt serene and welcoming.  I still had the bitter taste of Cabo in my mouth and feared another disappointing disco night.  But here there would be no disco, just beauty and tranquility.  And our moods quickly changed from “Is this journey worth it?” to “There is no doubt whatsoever.”  Nine of the eleven of us upgraded our lunch from
fish to lobster for a mere $5 upgrading fee.  We were then herded off in a cattle car that extended far above the ground as we headed to a dune beach.  When I asked the driver if we were going to infamous Taroa Beach he snapped at me, “The Lonely Planet are liars.  The beach is called the Dune Beach and the next edition of their book will correct this error.” 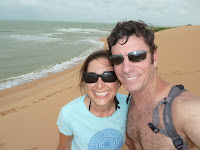 We crossed a lovely landscape strewn with Wayuu family homes, green flora,and a variety of animals that included goats, sheep, donkeys, snakes, and birds, and we arrived at a location peppered with sand dunes.  We scaled one of the higher dunes – about 12 stories in height – and we all ran and slid down the dune directly into the stunning turquoise colored sea below.  The virgin beach was gorgeous with dunes surrounding us from up above.   On the return to our guesthouse we stopped at the northern most tip of the entire continent.  We also stopped to pet baby goats and waved to the Wayuu who maintained their distance in space and attitude.  That afternoon after lunch we were taken to a second beautiful beach called Bahia Hondita where we strolled and found sand rich in iron and sand dollars.  Simply beautiful.  On this night after
dinner and drinks we again slept in hammocks but this time the night was quiet and we slept reasonably well. 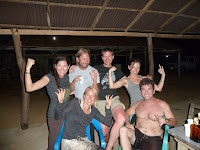 Very early the next morning the captain awoke us urging us to get ready as the sea would be getting rougher as the day progressed.  The ride back was scary.  Waves towered above us as we were tossed once again at the sea’s mercy.  The only thing that abated my fear was the fact that the captain’s wife and young son were also in our boat so it couldn’t have been too bad, right? 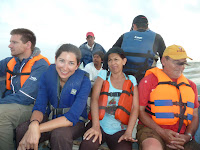 After we survived the boat adventure, I was dreading the bumpy five- hour portion of the drive and knew this would be an exhausting return journey.  When we finally reached Mi Cassona in Riohacha just before nightfall our driver exclaimed, “Finally, civilization.”  I sort of looked at him and thought, “Civilization?  Well…sort of…I guess.”
New article on Science and Education:  Science Isn’t Scary:

You can restore the Ocean!

Talking Travel On The Good Life With Mike Wreyford
Green Dragon Tavern and Museum: Visit Carlsbad, California with We Said Go Travel
It's One Atom at a Time
Want to go traveling? Take a Virtual Field Trip!