Reaching Out for Italy 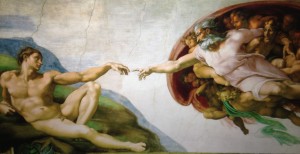 High above the swirling mosaics of the Sistine Chapel’s floor are Michelangelo’s famous frescoes. The genius of a man ahead of his time calls tourists’ heads irresistibly upwards, drawn by the intricacy and vibrancy of paint that has had centuries to dry, but remains indisputably flooded with life. Amidst this overwhelming beauty is a single tableau that embodies so much of what my trip to Italy with my father meant to me.

The Creation of Adam is perhaps the most well known of the frescoes adorning the ceiling of the Sistine Chapel. Ethereal colors depict God reaching for the hand of Adam, fingertips outstretched, and left never quite touching; representing the moment just before God granted life to man with just a sparking touch from his finger.

It is the space left between these outstretched fingertips that symbolizes the root of a daughter’s lifelong dream finally come to fruition. A dream I’ve held for so long, I don’t quite remember the exact moment my heart first picked it up. A dream to return to Italy, the homeland of my family’s ancestors with my father.

I’ve always viewed my father, an Italian man with a contagious smile and a ferocious love of pasta and family, as being larger than life, and he has been my hero since long before I even knew the meaning of the word. But ironically in the very beginning of our story, whose pages started to turn nearly 21 years ago now, he says he needed me; just an infant then, as much as I’ve always needed him.

Right before I was born, my grandfather died. Making it so I would never meet the man who was more than a father to my dad, but also a best friend. Growing up, I never wanted anything more than to know the person who had meant so much to the man that has always meant so much to me. I never wanted anything more than to be able to connect to this past, to fill in the gaps and the spaces, to make tangible the stories and the memories that I had just missed out on.

Italy became all of these dreams wrapped up into one. To return to the place where it all began for my family, to become one with a heritage I had never known; and to do it all with the person forever linking me with a past that remains attached to me however threadbare – the idea held the flavor of destiny, a fate delicious, like luscious mozzarella cheese over a fine marinara sauce.

My junior year in college brought me to Europe this September to study abroad in the south of France, a region just twenty minutes from Italy’s border. As the physical distance closed, so did the feeling of impossibility, and the vagueness of a far off horizon after which I assumed this dream might one day set, began to lift. And somehow, whether it was with the same preordained destiny of mozzarella cheese and marinara or not – my dad booked a flight to meet me in Rome.

It was with all of these things in mind: the infant child that passed the ghost of her grandfather on his way up to heaven while on her own route down to earth, the baby that brought a small light of something good to a man who had been plummeted into the darkness of grief, the girl who’s heart always burned with curiosity about where exactly it was that she came from; that this woman came to be standing next to her father at the center of Vatican City in the heart of Rome, Italy, craning her neck up at Michelangelo’s Creation of Adam.

And as we both stared up, father and daughter regarding the magnificent assembly of awe-inspiring tableaus beneath painted arms outstretched since the 1400’s, I felt as if something had shifted. As if fingertips immobilized inches apart had moved, had reached out just a little bit further, and met. As if in the homeland of my grandfather, I was finally in touch with what for so long had been intangible, and with that touch, a spark had ignited just as Michelangelo had painted. Not one of life, but one of identity, one of recognition, one of family.

About the Author: Katherine Miller was born in Syracuse, New York and is a junior at Marist College. She is currently living in Antibes, France, but is a true Italian girl at heart and loves pasta, pizza and gelato almost as much as her Dad.