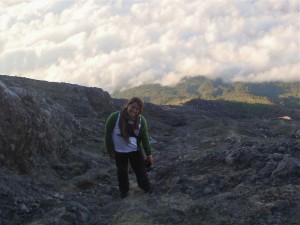 “If she can do it, I’m sure I can,” I answered, cockily.
Bagon, a Balinese friend I had made along the way had asked if I was sure I could climb the mountain- finish the 6-hour trek to the top of mighty Mt. Agung, the tallest volcano in Bali at 3,142M and the 5th highest in Indonesia.

I had no doubt in my mind that I could- if the tiny Thai woman I’d met the day before could do it, surely I could hike the volcano as well.
Bagon looked at me with a quiet smile and nodded his head,
“Yes, I think you can,” he finished.

I was 24 years old at this moment. I had been living in Korea for a year, and taken off to Indonesia for my first solo-backpacking trip. I had spent 6 weeks traveling around Bali and Lombok, and this hike was the last thing I would do before heading home.

I was woken up at 1AM for the hike.

It was 2-3 hours to the top, and I would make it in time to see the sunrise over a sea of clouds.

Everything started out beautifully. We began at a small temple, where my guide, Maudi placed an offering and said a prayer to keep us safe. She was small, kind and tough. Her English was good as she explained that she does this trek a once or twice a week to make money for her family. Our flashlights lit the way as we climbed up along the dirt path.

About an hour into the hike, we passed by a group of guys heading the opposite direction. As the two guides exchanged words, I asked later what that was about,
“They were too tired,” Maudi explained simply.

As we continued up, the time passed more quickly than I expected but it was challenging. Once or twice the thought of turning around entered my mind. But I pressed on, not being one to give up. Closing in on the summit, the brush turned into volcanic rock. The climb was so steep at points that we had to enlist our hands to help with the ascension.

After three hours, I was finally able to sit atop the mountain and the sea of clouds; peering inside the volcano as the rising sun cut across the sky. I felt empowered and free. I had conquered not only this hike, but also this past year on my own. I celebrated my accomplishments and the independence I strove for.

But the trek wasn’t over; it was only half way done.

It wasn’t until we descended off the volcanic rock at the top, that I realized my shoes had no traction. My sneakers were old and worn- and dangerous on this steep decent.

I couldn’t trust my footing as my feet slid out from under me in the dirt and brush, over and over again. Coming into the second hour, my legs were shaking uncontrollably from both the stress of the trek and the fear of constantly falling.

As my fear grew, anger consumed me as tears began running down my face. For the first time in my life, I didn’t know how I could continue on.

I sat down with my face in my hands.

Humiliation of my own weakness and fear had shredded any armor I was wearing. I was exposed, bare and desperately alone. The victory of making it to the top was overshadowed by this desperate descent. At this point, Maudi had stopped giving me words of encouragement and was as silent as I was.

But there was nowhere to go but down. I had to stand myself up and continue down the mountain. In each step, I felt like I was about to fall apart, so I took them slowly.

Four hours later, I finally made it back to the temple I had started at. I was flooded with relief. I gave Maudi a hug, thanked her and climbed into the waiting car. My feet were covered in blisters, and my legs jolted in spasms. I was exhausted, emotionally and physically.

And this is the place I am grateful for, Mt Agung. What I learned from this mountain is life will give us these moments of empowerment and confidence. But the victory isn’t in the celebration on the top of the mountain, when everything is going good. It’s in that quiet moment when you’re tucked into a ball in the passenger seat, tears still falling down your cheeks, body and soul aching from being pushed far beyond its limits. It’s when you realize just what you are actually capable of, and you can whisper to yourself, “I did it.”

**************
About the Author: Rachel McCoullough is a newbie travel writer based in Kaohsiung, Taiwan. She has been teaching ESL for over 5 years, and has loved life in Busan, South Korea and now Taiwan. Over the years, Rachel has been known to take off for months at a time with only a backpack and notebook to see what adventure life has in store. Check out her blog at: Insightful Stumbling and Flickr: Traveling Photos.

Transformation on the Island of Java
Negara, Bali – Land of exiles and daughters
Japan: The Magic of Shirakawa Gō
Indian Rock Garden: A Peerless Creation in Chadigarh