Praying is like Playing Jazz: Shabbat with Rabbi Yoshi Zweiback 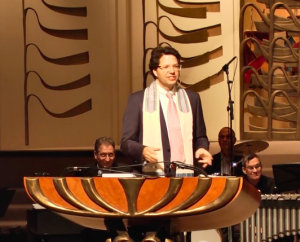 I’m lucky – I’ve got a lot of great Rabbis in my life – teachers, guides, friends.

(I should say – we are all lucky. We’ve all got great rabbis in our lives – great Cantors, too! And a great community…)

Here’s a teaching from one of my rabbis, Levi Weiman-Kelman, at Congregation Kol Haneshama in Jerusalem:

“Praying is like playing jazz. The more you pray, the richer your prayer becomes. You can pray alone, but the exciting things happen with fellow pray-ers. It helps to know and trust the others, too (although you learn a lot when you pray with new people)… Sometimes we all pray in harmony, other times we each pray at our own rhythm, at our own volume.”

Judaism and Jazz from Stephen Wise Temple on Vimeo.

I remember the first time my friend and rabbi, Levi Kelman, taught me this – it was in a t’fillah seminar during my first year of Rabbinical school. I loved the metaphor from the moment I heard it – prayer is like jazz.

Our Siddur is the framework – the basic chord changes that make up the song. But there’s room in every service for improvisation – places to add our own prayers, places where we can “solo.” Places where we can scat!

Another one of my rabbis, a cat by the name of George Gershwin, you know the man, once taught that “life is a lot like jazz – it’s best when you improvise.”

Tonight – for a few minutes, I want to explore how Judaism is like jazz.

Jazz, of course, is a modern invention, just over a hundred years old. It’s uniquely American, too.

So what could it possibly have to do with Judaism, a three thousand year-old-tradition born of the Middle East, coming to America, mature and fully-formed before Jazz was even a glimmer in Louis Armstrong’s mama’s eye.

The word “jazz” originally meant “energy” or “spirit” or “vigor”. It didn’t even first refer to music but rather to sport – baseball to be exact.

A pitcher for the Portland Beavers by the name of Ben Henderson, quoted in the LA Times in April of 1912 referred to his new pitch as the “Jazz ball.”

“I got a new curve this year,” Henderson was quoted as saying, “and I’m goin’ to pitch one or two of them tomorrow. I call it the Jazz ball because it wobbles and you simply can’t do anything with it.”

The word took off and was used around the country to refer to something that had “pep”, vigor, and energy.

The first references to music comes in 1915 in Chicago to refer to a sound known as “jazz blues” that had been imported from New Orleans.

By 1916, 1917, the Dixieland sound had swept the nation and Jazz was everywhere.

Back in 2001, the American Dialect Society proclaimed “Jazz” to be the word of the 20th century.

Tonight – in honor of Jazz’s 100th or so birthday, in honor of the secular  New Year, in honor of the Jewish month of Shevat, a time of renewal, imagination, and hope, when Spring is spring – and just ‘cuz we like jazz – we’re celebrating this uniquely American, modern musical form.

And jazz, hepcats, is like Judaism in some powerful, powerful ways, can you dig?

So in honor of Jazz’s 100th birthday, a few thoughts about how jazz is like Judaism and about how we can jazz up our Judaism if you will.

Jazz has energy, like that crazy curve ball, it jumps.

Jazz is experimental and improvisational.

Judaism has always been experimental and improvisational, too. Breaking boundaries, smashing idols, innovating at every step.

Abraham broke with the past, crossed over from Ur to Eretz Yisrael. He smashed his father’s idols and invented something new.

When the Temple was destroyed, the Rabbis called an audible, invented prayer, made the Temple portable.

Maimonides in the 12th century – transformed Judaism. It was all about the harmony. The harmony between Judaism and science. The harmony between philosophy and the eternal truths of our tradition. ROM bomb was improvising. Updating Judaism to make it sound contemporary and fresh.

And finally, Jazz is fresh – it is always in a process of renewal. It is eternally new because it’s never the same. Even the same song, a standard performed thousands of times, is different when it’s performed tomorrow. It’s the nature of improvisation – it’s got to change. Every day, the melody is reborn.

And so too, if we would have the courage, with Judaism. Each day, we can make it fresh – live again. Every day, is a chance for renewal. And this, this is not a newfangled idea in our tradition. It’s not, actually, an invention of the architects of Reform Judaism. It is – in fact – as old as the tradition itself.

Each morning, as part of the Shacharit service, we thank God for the gift of creation, for this wondrous world of ours. We pray:

God – in love – shines light on the earth and on its inhabitants.

And in God’s goodness, God renews – every day, always – the work of creation.

Or – perhaps – we could read it as God renewing, every day, CREATIVITY itself.

Together, in this place, this community committed to meaning, to goodness, to making a difference in our world, to changing our world for the better – we experience the Jazz of Judaism.

Finally – hepcats – an invitation. Jazz is a communal sport, a communal activity. Great players, great composers, and a participatory community that provides support, encouragement, and feedback.

To Jazz up our Judaism – we need you. Your voices. Your ideas. Your passion.

Can you dig it?