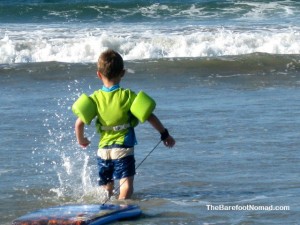 Thank you to Micki for her post about her family journey to the beaches of Costa Rica. We hope she will share more of her adventures with us on our site.

Costa Rica is everything that the tourist brochures claim: lush, steeped in adventure, and chock full of amazing wildlife.

But we’re beach bums. All four of us are never happier than when we’re barefoot on the sand. So, of course, our first order of business in Costa Rica was to head straight to the beach.

As a family, we’ve been fortunate enough to visit beautiful beaches all over the world, including Varadero in Cuba, Boracay in the Philippines, Kailua in Hawaii, and Mamitas in Mexico.

At first glance, I thought we’d be disappointed by the muddy looking grey sands of Playa Tamarindo. I was so wrong. It’s only when I got close that I realized the water was crystal clear, and the swath of beach was wide (and seemingly, endless). 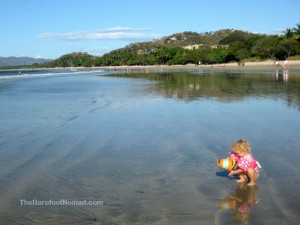 Tamarindo, a small town on Costa Rica’s Pacific side, is well known by surfers the world over. The beach break on Playa Tamarindo was made famous by the classic surfing movie Endless Summer II, and it’s often crowded with surfers trying to catch the next big break.

Because half of our little family was under six, we ventured a little bit to the south to Playa Langosta, where the waves are smaller, and the beach is quieter.

What followed was pure beach bliss.

Cole, at age five, caught the gentle waves on his boogie board, and giggled madly as they brought him into the sloping shore.

I lounged in a hammock, watching the kids and Charles build sandcastles. 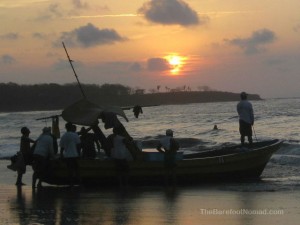 As we grew hot in the midday sun, we ventured out into the clear blue ocean. We ducked under waves, and floated, carefree, as the waves pushed and pulled us.

As sunset came, we stood on the shore watching the colors creep across the sky over the Pacific.

How to get there:  The closest international airport is in Liberia. From there, it’s 45 minutes by taxi or bus to Tamarindo.

What to do:  The main attraction in Tamarindo is the beach, but there are a host of other activities to keep you busy, including zip-lining, ATV rides, spa treatments, catamaran tours, watching nesting leatherback turtles, and eating at the dozens of excellent restaurants.

When to go:  October to March is best if you want to watch nesting leatherback turtles. If you’re surfing, the waves are biggest in September and October.

Have you ever had that perfect day at the beach? Tell us about it in the comments below!

Micki Kosman writes about travel, tech and family at www.thebarefootnomad.com.

New Page: Most Recommended Travel Apps
The elusive Room 27 at Planet Baobab, Botswana
Top 10 Things to do in Miami Beach
Denmark: The Many Reasons That Make Copenhagen Worth Visiting