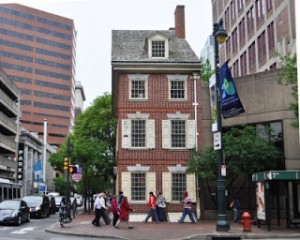 Pennsylvania is a beautiful state. In Chocolatetown, Hershey we became children all over again. In Pittsburgh we were charmed by the former steel capital of the world. But Philly is special! It evoked a different set of feelings, especially for me, who just took my Oath on Valentine’s Day 2011, at the young age of 62, as a naturalized US citizen!

My American education was most intense in the 2 days we spent in Philly. Independence Mall is the nexus of the historical places: the National Constitution Center, the only museum of its kind in the world, the President’s Site from where Washington governed the nation for 2 years, Liberty Bell, which has continued to be the world symbol of freedom in spite of a crack, and the Independence Hall, where in 1776 55 brave men signed the Declaration of Independence and in 1787 39 great men signed the US Constitution. 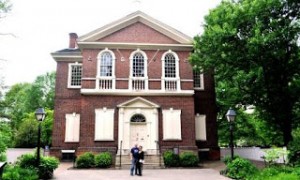 In the immediate vicinity of the Mall is Benjamin Franklin’s grave at the Christ Church Burial Grounds. Franklin is the gifted man who discovered electricity, among others. He so influenced the shaping of American thought, serving as a statesman and later diplomat during the critical revolutionary and nascent government days. Inside his former neighbor’s building at Franklin Court, the replica of his print shop is preserved, of particular interest to Bill whose career revolved around the industry.

Nearby is the Carpenters’ Hall, built by the craftsmen of that period. It is where the first Intercontinental Congress was held in 1774, paving the way for the American Revolution of 1776. Three distinguished homes are also within walking distance of the Mall: Betsy Ross, the woman who made the first American flag, Mary Todd, grandest first lady during the Madison presidency, and the Declaration House where Jefferson wrote the Declaration of Independence. A block away is Washington Square where the Tomb of the Unknown Soldier honors those who fought in the American Revolution. 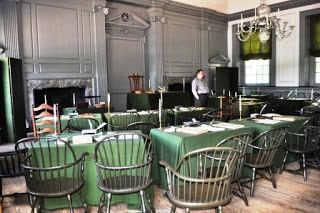 A little further away is the Philadelphia City Hall. At 548 ft tall, it is the world’s second-tallest masonry building (weight of the building is borne by granite and brick walls up to 22 feet rather than steel), only a foot shorter than Mole Antonelliana in Turin. Atop the building is the statue of William Penn, founder of Philadelphia. A few more blocks along the Benjamin Franklin Parkway are Rodin’s The Thinker and another block away, at the steps of the Philadelphia Art Museum, stands the statue of Rocky.

Several more blocks to the north you will find the Eastern State Penitentiary, an American prison from 1829 until 1971, now a museum. With a unique wagon wheel design, it redefined the revolutionary system of separate incarceration. It was the largest and most expensive public structure ever constructed in its time. Emphasizing principles of reform rather than punishment, it quickly became a model for more than 300 prisons worldwide. 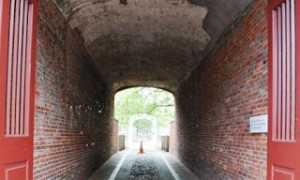 And another few blocks to the east is The National Shrine of St. John Neumann who in 1977 became the first American male to be canonized, 1 of 7 American saints). Located in St. Peter the Apostle Church built in 1843, his waxed body now lies in a glass-enclosed reliquary under the main altar of the lower church, after it was exhumed from the church grounds in 1862. A few more blocks east is the Edgar Allan Poe National Historical Site, one of two homes where he lived that is still preserved (the other one is in New York). This is the home where he wrote most of his significant works; where he was happiest.

These are all wonderful examples of values in American leadership: intellectual, physical, emotional, and spiritual. We may have a nomadic lifestyle, believing that every place has its special meaning; we have now been to 49 American states, 9 Canadian provinces, and 6 Mexican states. I had considered myself lucky to have won a 6-year high school scholarship at the American School in the Philippines when I was 13. There I was introduced to American History and psyche through books. But in Philly it all came alive. 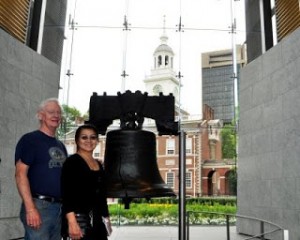 Now, at 65, I am even more fortunate for having become a naturalized citizen, roaming the vastness of America and enjoying the fruits of its early leaders’ genius and sacrifice with my American husband Bill! We are free to be where we want to be and do what we want to do. And I am free to be who I want to be. And I want to be an American.

About the Author: After stints as CEO of Philippine pioneers in information technology, Carol migrated to the United States.   Soon after she married Bill in 2008, they started and recently completed a 4-year cruise of North America in an RV which is written about in a blog. Carol has a BS in Math, an MBA, and a DPA abd from the University of the Philippines.