Paris: Will My Mother Teach Me Courage?

It was 1973 and my parents were in Paris. I was left at home with my older siblings and coincidentally, a French housekeeper. The plan was that while Dad would attend meetings during the day Mum would go sightseeing. They’d meet up at night in some little bistro and share their news over a romantic dinner. On the first day Dad gave Mum 100 Francs to spend, a fortune in those days. Given she was a French teacher she would have had no worries about speaking the language and being understood. I went to Paris for the first time 35 years later. Unlike my mother I speak no French at all. I had to rely on my husband Kim, who luckily for me can speak the language well. 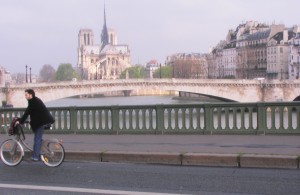 I adored Paris. It was everything I expected it to be and more. The sights, the people and the food were exactly as I had hoped. We stayed in a tiny room in the 5th arrondissement with a bathroom so small you had to go outside to get from the shower to the toilet. Nonetheless, we loved it. We were a stone’s throw from Rue Mouffetard and most of the major sights were in walking distance. We strolled to the Louvre and giggled at the sight of a crocodile of handholding kindergarten children solemnly listening as their teacher explained the Kandinskys. Another day we wandered up the Seine and entered Notre Dame Cathedral. We were silenced by the glorious sounds coming from the choir locked in an intense practice session and trembled as their voices rose to mingle with the glorious stained glass panels on the back wall. On a cold bright spring day we sat in a park on the aptly named Bourgeois Street and watched as shivering African nannies supervised tastefully dressed blonde toddlers as they played in a sandpit. 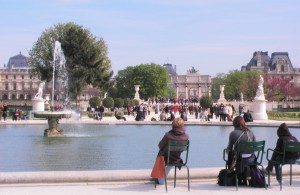 At the end of every day we explored the boulangeries, cafes and bistros along Rue Mouffetard. We stood with our noses pressed up to the glass, gawping at the cascade of chocolate in one window, the wall of cheese in another and the hundreds and hundreds of different types of salads, sausages and scintillating meats on display. All around us thin, elegantly attired Parisian women glided by with breadsticks tucked under one arm and Foucault under the other, managing to look both fragile and tough at the same time.

When my father came back to the hotel to change for dinner, he found my mother sitting exactly where he had left her. On the bed beside her was the 100 Franc note, intact. She had sat in the hotel room the whole day, too afraid to go out in case she made a mistake when she spoke French. I don’t trust easily either, and it was difficult and frightening to always have to ask Kim to translate for me. Translate he did though, and I learnt that having the courage to trust yourself and others opens up the world.

Mountain Gorillas in the Jungles of Rwanda, Africa
Turkey: An Ideal Destination for a Family Holiday
Al Hirshen Comes of Age in The Catskills
The Walking Dead: Día de los Muertos in San Miguel de Allende

I was born in Sydney, Australia, and grew up on the leafy lower North Shore. As soon as I finished school I moved to the inner city suburb of Newtown. After a year at university I left and worked in various jobs, including in the public service, as a cleaner, sales assistant, waitress, bar maid and car counter, before going overseas. Once there I hitchhiked through the UK, travelled in Europe and arrived in Turkey just as the Gulf War was starting. One year later I was back in Australia. Over the next six years I worked in the retail book trade and publishing, as well as completing a BA (Hons) in Sociology at Macquarie University. I then spent the following years moving between Australia and Turkey. In Turkey I worked as an English teacher at universities in Istanbul and in central Anatolia, while in Australia I worked in publishing, accounts, and as an English teacher and freelance proof reader, before deciding to call Istanbul home. I now live on the Asian side of the city and I love it I add regular stories and photos to my Facebook page https://www.facebook.com/InsideOutInIstanbul. You can read my updates about the June 2013 Gezi Park protests in Istanbul on http://www.abc.net.au/unleashed/4731112.html, http://www.abc.net.au/unleashed/4754738.html and http://www.abc.net.au/unleashed/4765788.html. Learn about my experiences as a blue-eyed foreigner living in a largely non-Western Turkish town on http://journals.worldnomads.com/goreme1990/ Hear me being interviewed by Geraldine Doogue on her program “Travellers’ Tales” on ABC Radio National about my experiences of living in Istanbul. http://www.abc.net.au/radionational/programs/saturdayextra/travellers-tales---turkey/3288390 I can also be heard on The Bunch, Austereo Perth – click on “Pick of The Bunch Weekly Podcast – 13th June 2013”. http://www.mix.com.au/shows/thebunch/podcasts/ I have published a book of stories about life in Istanbul called "Inside Out In Istanbul" which is available in paperback and as an e-book through Amazon. http://www.amazon.com/Inside-Out-Istanbul-Lisa-Morrow/dp/148206345X/ref=sr_1_1?ie=UTF8&qid=1369476420&sr=8-1&keywords=inside+out+in+istanbul Most recently I have recently completed a linear travel narrative called "Where the Tulips Dance: Finding the Heart of Istanbul", about my move and subsequent life in Istanbul. It is currently being considered by a number of publishers.

2 responses to “Paris: Will My Mother Teach Me Courage?”