Many bridges in Paris have made it into the annals of worldwide fame: Pont D’Alexander, Pont Neuf, and the modern Pont Solferino, to name a few. One favorite is the Pont Des Arts, loved for many reasons by Parisians and visitors alike. The pedestrian-only bridge, which leads directly from the left bank into the Place de Louvre, draws visitors for many reasons during all times of the year. Here are a few reasons why the Pont Des Arts is the liveliest bridge in Paris. 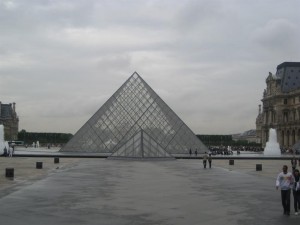 The central location of the Pont Des Arts makes it happily unavoidable during a visit to Paris. When crossing the Pont Des Arts from the left bank to right, behind you will be the Académie française. This impending, domed building is home to les immortels, forty academy members who hold the keys to the french language. These members, who are a part of the Academie for life (unless removed for bad behavior), plublish the official French language dictionary. Intimidating, especially for visitors who are still struggling to grasp basic words in the language!

Across the bridge sits the Musée du Louvre, one of the largest museums in the world. Formerly a fortress and palace, the Louvre and the attached Tulleries Garden are a source of French national pride and worth a visit. On the first Sunday of each month from October to March, admission to the Louvre—and select other museums in Paris—is free of charge. 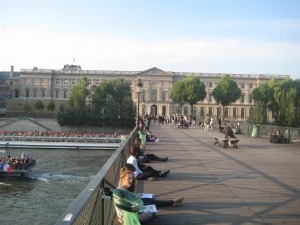 On warm nights, especially in the summer, the Pont Des Arts becomes a gathering place for Paris’ young adults. You will find university students, au pairs, and artists sitting along the edge of the bridge with a bottle of wine, enjoying a picnic dinner. As the night moves on, music fills the air and the dinner groups began to blend and mingle together. It is the place to see and be seen, and the favorite place to kick off a night of Parisian fun- and maybe make a new friend or two!

During the day, the Pont Des Arts lives up to its name as artists and sellers line the bridge with their canvas works and sculpture. Though not as annoying as the peddlers in the city’s parks, it is important to have your wits about you when dealing with them. However, there are a number of talented painters and sculptors who sell their works from the Pont or on either side of its steps, and their work is worth a second look if you have the time. 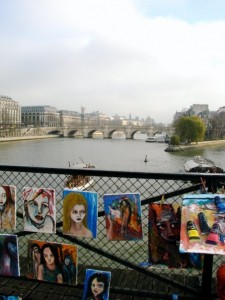 Romantics particularly love the Pont Des Arts because of the famous “love-lock” tradition. Lovers and friends visit the bridge, armed with a padlock, some paint, and a key. The pair writes their names or a message on the lock, then secure it to the fencing of the bridge and throw the key into the Seine. In 2010, the Paris City Hall banned the use of love-locks on the Pont Des Arts, but recently they have begun to reappear. After a railing collapsed in early 2014, glass or wooden panels have replaced some of the traditional railings and wire fencing on part of Pont des Arts to prevent amorous couples from attaching padlocks inscribed with their names, initials or messages of affection.

Whether you’re on your way to the Louvre to ponder La Joconde or simply on a stroll towards the Jardin Luxembourg, try to cross over on the Pont Des Arts- you never know what you might find on the wooden planks of this bridge.

India: There's Something About Lord Buddha That ...
Christmas in The Philippines - Part 2
Escape LA: Loreto, Mexico’s Hidden Oasis
A road trip through the Argentine wine country

Lisa Gabrielson is a recent college graduate with a passion for travel, writing, photography, and sailing. She has traveled all across the Caribbean, North America, and Europe, including an 11-month stint as an Au Pair in France. She is currently an editor in Newport, Rhode Island.