On Writing: Words of Wisdom from Stephen King 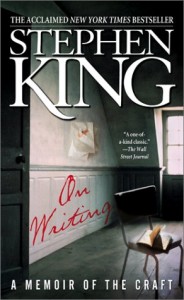 Stephen King shares his personal life story and philosophy on learning to write well in his book, On Writing: 10th Anniversary Edition: A Memoir of the Craft

. As he says, “I believe large numbers of people have at least some talent as writers and storytellers, and that those talents can be strengthened and sharpened.” I highly recommend this book and every writer will gather new tools for their writing toolbox.

King talks about his rejection letters and about lack of support from those around you. He says, “I realized that almost every writer of fiction and poetry who has ever published a line has been accused by someone of wasting his or her God-given talent. If you write (or paint or dance or sculpt or sing, I suppose), someone will try to make you feel lousy about it, that’s all.” King’s dramas and traumas in childhood as well as his successes and suggestions will inspire you to write more.

King’s first editor taught him: “When you write a story, you’re telling yourself the story,” he said. “When you rewrite, your main job is taking out all the things that are not the story.”  Using ideas and tips from King’s book, we are working on taking 10% out of our memoir of our first sabbatical in Asia.

I really appreciate King’s clear examples. “The timid fellow writes: The meeting will be held at seven o’clock because that somehow says to him, “Put it this way and people will believe you really know.” Purge this quisling thought! Don’t be a muggle! Throw back your shoulders, stick out your chin, and put that meeting in charge! Write The meeting’s at seven. There, by God! Don’t you feel better?”

Inspiration from his book:

Good writing is often about letting go of fear and affectation.

Reading is the creative center of a writer’s life.

The combination of a healthy body and a stable relationship with a self-reliant woman who takes zero shit from me or anyone else has made the continuity of my working life possible. And I believe the converse is also true: that my writing and the pleasure I take in it has contributed to the stability of my health and my home life.

Writing isn’t about making money, getting famous, getting dates, getting laid, or making friends. In the end, it’s about enriching the lives of those who will read your work, and enriching your own life, as well. It’s about getting up, getting well, and getting over. Getting happy, okay? Getting happy.

Writing is magic, as much the water of life as any other creative art. The water is free. So drink. Drink and be filled up.

Practice the craft and participate in our Travel Writing Contest:

Now that you are inspired by Stephen King’s words of wisdom, we hope you will choose to send your stories to us for our Independence Travel Writing Contest. It is free to enter. Contest closes July 4, 2013. $1,000usd in CASH prizes. Click here for all the details.

Do you want an Artsy Athletic Adventure in Aruba?
Advance Women, Advance Equality with Shelley Zalis from The Female Quotient
Thailand: Finding Friendship and Tea Above the Clouds
10 Outstanding Outdoor Adventures in Canada