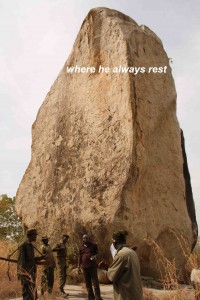 Nigeria: A visit to the Ruin at Old Oyo National Park

Ever since I was born, I’m always thrilled with culture especially the culture I was born into (the Yoruba culture). I love the moon light stories of long past warriors; those that have made their footprints in the sand of time. Invariably, travelling and excursion are what I find delight in.

I remembered one moonlight night when my father told me about one of the prominent past Alaafins (King of the Oyo Kingdom), Sango who was the third king of the Oyo Kingdom. His symbol is a double-headed axe, which represents swift and balanced justice. He is the owner of Bata (double-headed drums), as well as the Arts of Music, Dance and Entertainment in the Yoruba Culture. This powerful King is not only seeing as a God by the Yorubas but by other tribes in other countries especially in the Caribbean. Sango is celebrated in Haiti, as a god of thunder and weather; in Brazil, he is known as Xangô; in Umbanda, as the very powerful Nago Shango; in Trinidad as Shango god of Thunder, drumming and dance ; and in Cuba, Puerto Rico and Venezuela – the Santeria equivalent of St. Barbara, he is known as Changó.

Stories about Sango’s life exemplify some major themes regarding the nature of character and destiny. Stories about Yoruba sometimes may bring confusion due to lack of uniformity. A typical example is that of the origin of the race. This is due to lack of documentation as often times this stories are pass down from generation to generation by word of mouth. In a set of stories, Sango is the son of Aganju and Obatala. As the story goes, Obatala, the king of the white cloth wanted to cross a river when travelling, which Agaju the ferryman and god of fire refused him passage. It was said that Obatala retreated and changed to a beautiful woman. The beautiful woman returned to the river and seduced Agaju who later allowed her to cross over the river. The result of the uneasy union between Agaju and the beautiful woman (Obatala) was Sango. Sango went in search of Aganju, his father, and the two of them play out a drama of conflict and resolution that made Sango threw himself into the fire to prove his lineage.

Sango had three wives; Oshun, (a river goddess) was his favorite because of her excellent cooking and she is celebrated in Nigeria every year in Osun State of Nigeria: a celebration that is recognized by United Nation Education and Scientific Organization (UNESCO), Oba (another river goddess) offered Sango her ear to eat. He scorned her and she became the Oba River, which merges with the Oshun River to form dangerous rapids. Lastly, Oya (Sango’s third wife) was a crafty woman who stole the secret of Sango’s powerful magic.

Oba was Sango’s first and legitimate wife, Oshun; his second wife, and Oya; his third wife, whom he made his queen. Oshun played a trick on Oba, out of jealousy. She deceived Oba that if she can cut a piece of her ear and offer it to Sango as part of his meal, he would love her the more. Oba, excited by this information, ran home to prepare Shango’s “amala”, his favorite meal. She sliced off her ear and stirred it into Sango’s food. While Sango was eating, he saw the ear in the food and was infuriated thinking that Oba was trying to poison him. Sango drove her from his house and Oba ran out crying. She fell to the ground and turned into a river which is still being worshipped till date. She became the patron of matrimony (as “Orisha”) and it is believed that she destroys marriages that abuse either partner.

Historically, Sango brought prosperity to the Oyo Empire during his reign. He is associated with the sacred animal, the ram, and the colors of red and white. Sango displayed his magical powers by directing lightning unto his own household killing his wives and children. He hung himself after the incidence; he was deified as the god of thunder and lightning.

This story which thrills me the most made me follows a research team called the Africa Mystery Researchers (Aditu) who are into mysteries happening in the world to see for myself where Sango really resided and the ruins of the Old Oyo Kingdom. What I found excited me. I couldn’t believe what I saw and other stories I was told which if I try to start narrate will take up to one year to finish. Lo and behold I felt so free and relax. Looking forward to another one.