New Zealand – Weekend in the Whanganui 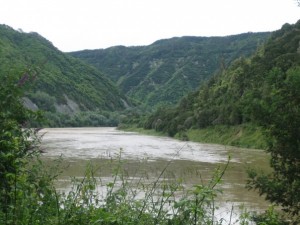 After the hectic feat of exploring a decent portion of Australia in two weeks, my friend and I escaped to New Zealand’s North Island to unwind. We decided the best way to explore the scenic beauty of New Zealand would be to drive through it. This was my first international road trip and first time driving on the opposite side of the road at that. We got into our Nissan Sunny and after one small breakdown (me, not the car) we were well on our way out of Auckland and into the New Zealand countryside.

Our first destination was the Whanganui River for a stay at the secluded Flying Fox. It wasn’t long after leaving Auckland that the topography changed from that of a bustling city to lush green countryside. The rolling hills of New Zealand’s countryside are reminiscent of the famous countryside landscapes of Ireland. As we approached the base of the mountain entrance to the Whanganui Forest the terrain became rugged and the climate a bitter cold. The mountains ahead were covered in thick fog which indicated a slightly threatening and unwelcoming climate; quite different weather from the rest of our trip thus far. We put in a call to the Flying Fox to let them know we were at the base of the mountain (you have to call ahead and let them know when to expect you since communication there is limited) and we were advised to stay at a nearby hotel until the morning to proceed. It was a wise choice as the drive into the forest is filled with narrow unpaved roads, drop-off cliffs, and no lighting to guide you at night. For those who might find the ruggedness of this route to be a deterrent, keep in mind there are various other options to venture into the depths of the Whanganui.

The heart of the Whanganui is a stunning tropical forest divided by a large river. A small turn-off from the road leads down to the North side entrance to The Flying Fox which consists of a cliff with the Whanganui River below, a cable car dock, and a gong. We shouted “Hello?!” to the other side of the river and hit the gong. The cable car line started up and we watched apprehensively as it dangled and bobbed crossing high above the river. When it arrived at the dock we placed our bags in the cable car, distributing all the weight evenly for balance and stability. Hovering high above the river in an open metal contraption attached to a single cable was somewhat unnerving, but it was all a part of the adventure.

Once at the other side we were warmly greeted by the owners. It was clear they take great pride in preserving the ecology of the land and the history of the indigenous Maori people. If you ask, they are more than happy to share their knowledge of the land and the stories of the Maori. One of the first stories shared with us was that the river’s pristine conditions can be directly attributed to the Maori belief that the souls of their ancestors reside in the river. The river is considered sacred to the Maori people and is indeed the focal point of this tropical escape.

When the weather permits, kayaking trips and hikes are popular ways to further explore the surrounding areas.Beyond the outdoor excursions, perhaps my most favorite activity was just sitting outside with a pen and paper and glass of wine while watching the river rush by. Words cannot adequately describe all the reasons why this hideaway in the forest is worth a visit, so I will let the photos do the talking.

Jillian’s first travel experience began when she was 10 months old, flying from her home in Los Angeles to spend the summer with family in Connecticut. However, it wasn’t until her college graduation trip to Israel and Greece that she truly appreciated travel and learned how big and small the world really is. After a brief stint in advertising, her travel cravings got the best of her and she traveled to Australia and New Zealand. Six months later she packed her bags and moved to Australia for a year and a half to get her master’s degree. During her time at university she traveled around Southeast Asia and decided to move to Cambodia and conduct research there to complete her master’s. She currently resides in Los Angeles… for now.