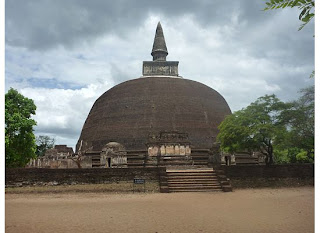 Last summer during a six week adventure in Sri Lanka, the small tear drop shaped island near India, I stood crushed for hours against George in three different crowded buses on a Friday evening in a near pilgrimage to the Far Northwest. I thought the war was over when we decided to journey on a six-week adventure to Sri Lanka but this Friday night made me wonder if it really was.

With bunkers on every street corner and gun-toting soldiers peering from their slotted openings, I said to myself, “Oh my, have we gone to Gaza on holiday?  Am I losing touch with reality?” Normally I would never go to the strip of land surrounded by Israel as a vacation spot,  but perhaps I found an equivalent country in Northern Sri Lanka, an area that has been devastated by over twenty-five years of civil war, followed by the horrors of the 2004 Tsunami.  It was as if we had stumbled on another war zone.

I saw UN trucks, UNICEF signs, and buildings with roofs labeled NEHRP — North East Housing Restoration Project. There were even signs that described money sent from Japan to help with all the rebuilding.

The next day when I woke up, I was grateful we survived the journey without being robbed or raped or otherwise brutalized, but then I remembered we actually had been robbed, sort of.  Here’s how it happened: The initial journey had gone well. Leaving the Sigiria Flower Inn with its attendant wild elephants that wander at night,  we took a couple of convenient buses from Iwanna Junction to Polonarua. In Polonarua, a group of three touts somehow convinced us to take a quick tuk-tuk tour  and that we’d make the three p.m. train to the North. At the conclusion of our tour, the 3pm train had vanished by turning into a two p.m. train and in the end that one may not have really existed.

Whatever the cause, we found that we’d been scammed. Maybe the phone call they’d made to verify the train schedule was a fake one; we don’t get ripped off very often but we were taken for a proverbial ride on this day.  Feeling angry and frustrated, I said, “No,” to more help from the touts. Having missed the train, we attempted to find a bus. In Habanara, the bus for Trinco was just leaving with standing room only. This sweaty bus seemed to have room for four more standing room passengers; little did I know that over the next two hours about twenty-five more bodies would be crushed into the aisles, a writhing mass of humanity that made a sardine tin seem positively roomy.

After swaying in the aisle, mashed like potatoes into the crowd, we arrived in Trinco and boarded a small van to Nilaveli just as the sun was setting over the water. My ten words of Singhalese seemed useless this far North and I just kept repeating the name of the hotel we hoped to locate. For a fare under a dollar, we rode in the van for thirty minutes or so, still without seats, and finally we were dropped by the side of the road near a sign that said, “Nilaveli Beach Hotel.”  This was not our destination but by now we were resigned to a hapless fate.

We walked about two kilometers in the near darkness and veered onto a seemingly random dirt road. A tuk-tuk driver appeared about fifteen minutes later to tell us the hostel we were searching for was now closed. Timothy, from Pigeon Island Resort (which was under construction and used to be the Maruo, the cheap hostel we wanted), said we should go with DaShan who spoke English and the tuk tuk driver who only spoke Tamil. Timothy and DaShan worked at Pigeon Island Resort and seemed to want to help us and we needed help.  So we went to Sea View and then Shahira Hotel which amazingly did have a sparse room for a cheap price.  Our quarters contained a few shelves, white sheets on the hard bed, purple pillowcases, pink mosquito netting, paisley print curtains and a red concrete floor. Completing the lovely design were orange walls and a drying rack; in the dark on a Friday night the room seemed perfect. 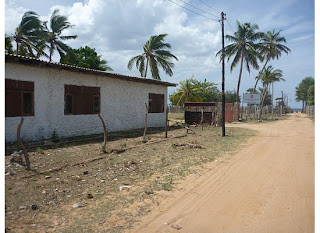 The hotel staff even served food, a great service since we were now in the middle of nowhere with few if any food vendors evident. Our new friend, DaShan, offered to take us on his run for supplies and to meet his friends. We were given to understand that had been his destination when he stopped to help us find a hotel.

DaShan took us to buy alcohol and spicy Dal and I even met the Chief of Police. Later on the beach, I realized I did not have a card or the address of our hotel. We were on the beach with five strangers in the dark in the North near beaches with no knowledge of how to get back to our hotel.  After much singing, drinking and chatting, we departed the beach but were unable to find our camera.  I had stopped in our new room long enough to wash my face, brush my hair and get the device. I knew we’d taken photos on the beach but I thought perhaps we had dropped the camera during our exuberant festivities. 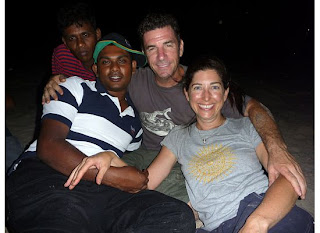 I flung myself on the ground searching for our camera. I wanted the photos! We had already been traveling for nearly two weeks. How could we lose the camera? In the end it turned out that one of our new friends had appropriated our property but finally chose to return it to us through DaShan.

And so ended a full day of being crushed on buses, enduring long journeys and stumbling into chance meetings. The incident at the day’s conclusion was a reminder that when you are traveling you need to be careful who you trust.  No one gets it right all the time but we do our best.

Confessions: Teacher or Traveler?
Where is the Ho Chi Minh Trail?
Who is The Drew Barrymore Show sending to Fiji?
Croatia: The First Rule of Swimming