Music on the Road: The Five String Addict 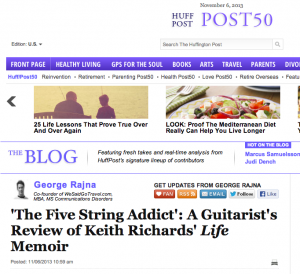 Today is George’s birthday! I wanted to share one of his latest articles about music: “The Five String Addict’: A Guitarist’s Review of Keith Richards’ Life Memoir” HAPPY BIRTHDAY to my soul mate, travel partner and a great writer and musician. Enjoy his new article and book review!

In Keith Richards’ memoir, Life, the Rolling Stone guitarist rocks readers along his lifelong journey that began on December 18, 1943. Life chronicles Richards’s career with the Rolling Stones since 1962 and tracks them from small clubs to massive arena concerts. Expected are the Rolling Stone drug induced antics, sexual escapades, and belligerent disregard toward authority. According to Richards, “If you’re going to kick authority in the teeth, you might as well use two feet.”

Unexpected is Keith’s ability to recall detailed minutiae such as the precise amount of money the Stones were paid for their very first gig in London; it turns out that Keith maintained a thorough diary. The Stones guitarist is articulate and well narrated with the assistance of James Fox. Particularly enjoyable was the description of how he came up with possibly the most iconic tune of all time, “Satisfaction,” literally while he slept!

Keith Richards’ contribution and historical importance as a guitarist and songwriter cannot be overestimated. Life details Keith’s love of music, his guitar playing style and chord construction techniques. More specifically Life delves into how Keith attains his unique signature sound and more importantly describes how his desire to imitate banjos from the old American south led him to remove the low “E” string and tune his guitar to an open “G.”

As a guitarist, retuning the instrument creates a discovery world since structured chords and scales are no longer applicable. This tuning was used to create archetypal Stones classics. Keith stated, “With the five-string it was just like turning a page; there’s another story. And I’m still exploring. With five strings you can be sparse; that’s your frame, that’s what you work on. ‘Start Me Up,’ ‘Can’t You Hear Me Knocking,’ ‘Honky Tonk Women,’ all leave gaps between the chords.”

About the Author: George Rajna, M.B.A., Masters of Science in Communications Disorders, is a bilingual speech therapist who has traveled to over one hundred countries across six continents. He composes music on the guitar and ukulele, and spent two years working in rural education for Peace Corps Paraguay. He is the co-author of Traveling in Sin. Since July 2012, George and Lisa have been living abroad in Southeast Asia follow their journey at We Said Go Travel.

Summer Science Fun for the Human Body
5 Things You Need To Know To Survive And Thrive After A Divorce, With Lisa Ellen Niver
What's out there? Another week of writing contests, opportunities and events
Love Rehab in 12 Steps: Find Parsley to go with your Risotto