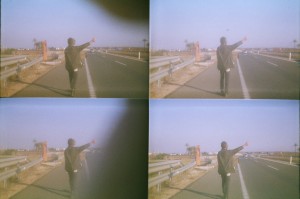 Perched upon sky blue stools that match the wooden square tables and painted archways of this small upstairs café. Hunched over sketchbooks, our backs resting on the propped open balcony doors that overlook the grandiose palace Mohammed Sixth. Men sing funeral hymns below, carrying a small wooden coffin the size of a child. Walking the streets of the medina with their grave load.

One never sees women at these cafes. Last evening this place was so full and warm with bodies, that we almost left, for at first glance, there seemed no place to sit in the three chambered café. Men in the center chamber, crowded around one of the square tables ushered us over, moving aside to show there is space enough for the both of us.

Brushing knees as we pass, sitting down we entered into a serious realm of the game Dominoes. They played in teams of two, four to a game. At various points of the game tension would mount and pieces would be cast down with a loud snap on the table, the pace quickening. One of the players seated facing us had deep-set sullen eyes, with his back to the bar and doorway of the café. All of them were nearly shouting at one another, half in Spanish, half in Arabic. This man spoke with a grave sternness and deep intensity until after several rapid turns and fervent slap down, he spread his long nosed, sullen-eyed face into a wide grin, laughing a deep guttural chuckle of victory.

Behind him, two men small in stature, like gnomes, work at the bar with their beanies towering high on their onion bulb heads. Here a copper urn sits above a cave of coal embers, glowing the color of an African sunset. Tea and coffee bubbles and froths in copper pots resting on the embers. National guards stand uniformed below our balcony, guarding the empty palace infinitely. Apparently, the king comes here for his annual vacation. Today a game of futbol plays on one of two television sets in café. Chelsea vs. Liverpool, Liverpool scores one point in the first minute of the game. On the other television screen a classic Spanish/Arabic drama is broadcasted. Looking around the place, around half the men wear western clothing and the other half, traditional djellabas.

The café is roughly six or seven strides from the entrance of Hotel Africa. Nordine, King of Hotel Africa, speaks French, German, English, Spanish, and Arabic. His frequent vocal outbursts are jovial, resonating profoundly within his throat “Bravo!! Salam alikom!!, Saha.” He sits upon his African throne, a green plastic chair, on the second floor balcony that overlooks the intricate tiled lobby of the hotel. There is a three hundred year old fountain in this lobby, the water sourced from the majestic Rif Mountains. Towering giants in the distance, they provide the skyline of Tetouan.

Two daily meals are served here around 2pm and midnight. Always cooked in a tagine, slow cooked tuna, squash, chicken, sweet potato, couscous, sardines, potatoes, vegetables, everything beautifully spiced and frequently served with hot peppers and lime. Flat bread serves as cutlery. 10-12 people sit around a four-person card table covered with clear plastic that also serves as a lobby desk where paperwork is filed and passports handed over. Everyone sat comfortably round this small squat plastic table, the green chairs moved down from the balcony for the meal. We all eat from the same tagine, respectful in portions and execution of fitting a mouthful onto a small piece of flat bread, torn for the occasion of each bite. The men in the cafes seem to be permanent fixtures and they get to know us well.

As unmoving as the blue back dropped photo realistic representations of daises in vases framed and hung on the café wall. And what of the dead child? Why is it only men carrying the body, walking the streets singing? A man wearing a grey djellaba helps another smaller man, wearing a beanie, stuff a small television into a peach plastic bag while the beanie man holds the remote in his left hand. The operation is complete and he sets it down on a stool in the cafe, it is unclear why. I admire the way death is met by the living here. Harmonic cries in the ancient knowledge of song, everyone falling into natural harmonies. Drawn to the sound, I stumble upon a small room above a hotel nearby. Banging on tabletops in furious rhythmic beating, a room full of young teenage men boys, raucously singing and banging beats of death in an air of mourning but not of great sadness, passionate creation of remembrance.

About the Author: Californian musician artist vagabond, this piece was written in Tetouan after spending 10 days hitching from Berlin to Morocco. Living in each moment, simply and freely.

One response to “Morocco: Saha صحة”