Mongolia: The Valley of the Yaks

As usual, I had no idea where we were going on that particular day in July 2010, but that’s half the fun of traveling in the Mongolian countryside. We ended up that night at what I now think of as the “Valley of the Yaks”, located adjacent to Khuisiin Naiman Nuur National Park in the Hangai Mountains. As we drove into the valley along the base of a steep slope, a large herd of yaks appeared above us, came galloping down a narrow path and ran across the road all around us. I suspected that I was going to like this place. A lot. 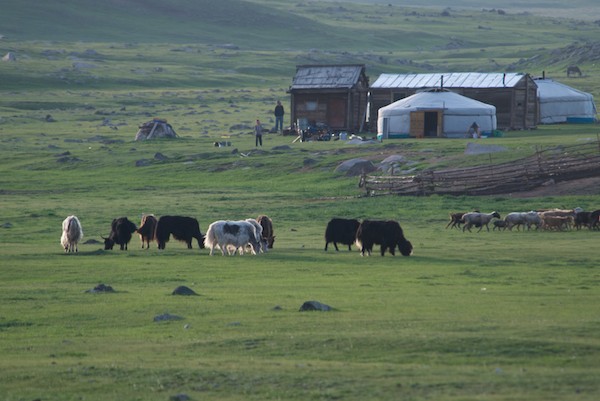 Two chilly-looking but lovely streams flowed down either side of the wide shallow valley, running over reddish-grey rocks through lush grass dotted with wildflowers and surrounded by the green mountains of a Mongolian summer. Mongol herder’s white gers with their traditional orange doors sat scattered picturesquely about in their summer pasturing land. Large furry yaks in a variety of colors, along with horses, sheep and cashmere goats, freely wandered about, grazing under the blue, blue sky. Black-eared kites cruised overhead, looking for inattentive steppe squirrels. And, best of all, there was no visitor infrastructure of any kind, no other campers and other than the occasional animal sound, blessedly quiet.

We drove to what I thought was the end of the road, which left the valley floor and continued straight up to the top of a steep slope, where there was, as on most high spots, an ovoo, this one made of a pile of rocks festooned with khadag, the blue offering scarves. Getting out and looking over the top, I noticed two things right away: A drop-dead gorgeous mountain lake nestled in the mountains, one of eight in the park (“naim” means “eight” in Mongolian”) and that the road continued down, and I do mean *down*, the other side at about a 45 degree angle. I was told that almost no one, not even Mongols in 4-wheel drive SUVs, is crazy enough to drive it even though it is the only road in the park that provides access by car to any of the lakes. The only other way to get to them is to walk or ride a horse. We climbed up a steep adjacent slope for an even better view, joining quite a few local Mongol day-trippers. Even though nothing in particular was going on, there was a festive feeling in the air. 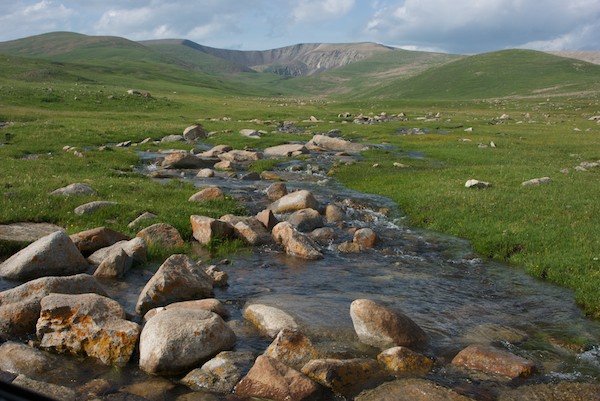 I took my lake photos and close-ups of some of the wild flowers that carpeted the ground; pale yellow alpine poppies, deep purple bellflowers and fuzzy white fleeceflowers, then it was back down the hill to find a campsite. We saw some Mongol guys who were sitting and chatting by the side of the road. As we passed by, one of them, who had obviously noticed that I was a westerner, yelled “I love you!” Almost without thinking, I yelled back “Bi mongol durtei!”, “I like Mongolia!”. Khatnaa, my driver/guide, and Soyoloo, the cook, thought this was hilarious, burst out laughing and high-fived me.

Khatnaa then decided that I needed to learn another Mongol sentence: “Bi argaliin udad dortei” which means “I like dung smoke.”, a reference to our battle with mosquitos a few days earlier at a remote lake in the Gobi when a small pile of smoking dung was the only thing that let us sit out in comfort in the evening. And I ended up having to repeat it at just about every ger we visited after that. All in good fun, of course, and it definitely made me a hit with the herders, showing off my Mongolian sentence.

Back in the valley, the time had come to find a place to camp for the night. I looked longingly at a pretty spot right down next to the stream, a location that most of us would picked in America. But up on higher ground was a dirt ring where someone had set up a ger. That’s the area that Khatnaa wisely picked.

After dinner, we sat and chatted in the warm evening air as the sun went down. Suddenly, as if a switch had been flipped, the wind kicked up and shortly thereafter it started to rain. Hard. Bedtime. And the realization the next morning that if that lovely stream had come up much at all, I could have gotten very wet indeed.

As is usually the case, the next morning was clear, sunny and warm. Soyoloo and I took turns washing each other’s hair down by the river, then it was off to the next place that I probably wouldn’t want to leave.

About the Author: Susan Fox is an oil painter who specializes in the animals, land, people and culture of Mongolia. She has traveled there seven times since 2005. See her work and learn more about the Land of Blue Skies at www.foxstudio.biz,  the home of her blog.