Mauritius: Somewhere on the seaside 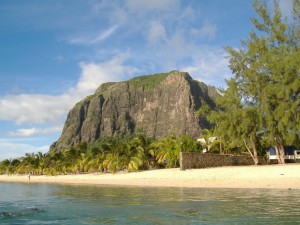 How far do you have to go to find freedom? In my case, I flew more than six thousand miles to my husband’s native country, Mauritius. During three weeks, he made me discover the people, the culture and the magnificent landscapes of this small island. Mauritius is not only a sandy beach as you see in travel brochures. Every place in the country has a history, if you bother looking for it.

One afternoon, we drove down the Chamarelle mountain on the west of the island, and stopped at this very small beach situated between two hotels. It was quite secluded and you wouldn’t know it’s there unless you’re a local. I decided to go for a swim and as I was in the water, I turned around. That’s when I saw it. This gigantic mountain was standing there, looking right down at me. The view was absolutely breathtaking. I suddenly felt very small and I had the strange feeling that this place had a special history. When I came out, I asked my husband and his family to tell me the story of The Morne mountain.

During the French domination, many slaves, mainly from Africa, were brought to Mauritius to work on the fields and on construction sites. They were very badly treated by their masters, were tortured and endured corporal punishment.
The story says that the maroon slaves (the ones who managed to escape), found shelter in the Morne mountain because it wasn’t easily accessible. The dense forest protected them from the hunters sent by their masters to kill or enslave them again. The story also says that after the abolition of slavery, the maroons saw people coming and got scared , thinking they were going to be killed. Instead of taking that risk, they shouted : “Zot pas pou gagne nou vivant”, which means “They won’t get us alive”, and decided to jump from the mountain. They didn’t know those people were coming to tell them about the abolition of slavery and they would rather die than lose their freedom.

Le Morne is a sacred site and is now on the UNESCO World Heritage List. It’s a symbol of hope and freedom, a symbol of resistance against the oppression, and is a very important place in Mauritius history. It’s an official recognition of the Creole identity and the history of colonialism in the island. 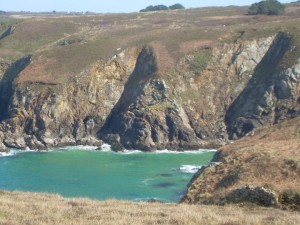 The mauritian slaves had their place of freedom, so where is mine ? Before writing this, I was pretty sure that this particular beach with the view of the Morne mountain was it. But it’s not. As I was thinking about my next words, I suddenly realised that my place of freedom is simply the seaside. It doesn’t matter where it is. It could be in Mauritius, where I love spending time, it could be in Ireland , where I live, or it could be in Brittany, where I’m from. I love the sea and couldn’t live without it. I love walking down the beach in my small irish village when the wind blows in my face and clears my thoughts. I love storms and watching the waves crash on the rocks in Brittany. It reminds me that we are so small in this immensely big ocean. I also love the serenity of the mauritian lagoon, especially in the morning, when the beach is empty and all I can hear are the little wavelets coming up and down the shore. I don’t need to go to the sea everyday, I just have to know it’s there, accessible if I want to.

We are all slaves of something: our job, our responsibilities, our emotions, our smartphone… But when I look at the ocean, I forget everything. It calms me down, it gives me strength, it makes me laugh, it makes me cry. It makes me feel at peace with myself.

About the Author: My name is Anne, I am French but I’ve lived in Ireland for the past 11 years. That’s where I met my husband, who is from Mauritius. I’ve been to his country a few times and I loved it so much that I created a blog about it.

Goreme Turkey: If You Look You’ll Find Yourself
Canada: I Enjoy Myself Without My Ears
New Mexico: Freedom On The Ground
Parahawking in Nepal: Free as a bird