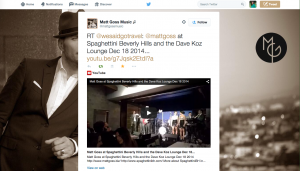 Often, choosing a venue with great performances means you will be eating sub-par food. Or if you pick phenomenal food, then there’s no entertainment. But Los Angeles has provided a five-star solution.

In Beverly Hills, you can have your cake and eat, it too; it even comes with music at Spaghettini and the Dave Koz Lounge.

What an honor to meet and hear@iammattgoss @spaghettinibeverlyhills in his concert. @lovebevhills #BeverlyHills 3rd Thursday of every month! Reserve now! Amazing food, service and entertainment!!

Tonight @spaghettinibeverlyhills see @ericbenet sing! This photo from @iammattgoss night there on Thursday. Incredible talent on stage and in the kitchen! Reserve now! #Beverlyhills #music

Choose @spaghettinibeverlyhills for the artists on stage and in the kitchen! @ericbenet, @iammattgoss, @davidstephenkoz to sing and make you swoon & Chef Scott Howard with these Sonoma Lamb Chops with honey, mint, & goat cheese gratin. Treats for all your senses! @lovebevhills #BeverlyHills

Matt reached international fame as a singer enjoying more than a decade of success and more than 17 million records sold Worldwide. His debut album “Push” went 7-times platinum, spawned 13 top-5 hits, and remained in the U.K. charts for an amazing 84 weeks! His record-setting video surpassed the making of Michael Jackson’s “Thriller” and he went on to sell-out the iconic Wembley Arena for 15 consecutive nights. Matt is still the youngest man to ever headline Wembley stadium! (70,000 people). He was the first since Elvis to knock himself off the number one spot in Australia, and held the number one spot in 22 countries simultaneously!

In addition to his successful recording career, in 2005 Matt released his autobiography “More than you Know”, achieving best-seller status in the coveted London Sunday Times. He has gone on to focus on songwriting, including writing the theme for the smash FOX program “So You Think You Can Dance” and the hit song “Change Me” for Keri Hilson and Akon, which is featured on Hilson’s chart-topping album “In a Perfect World”. Matt’s song “Lovely Las Vegas” was used by NASCAR to support the 2011 campaign.

Who can you meet at International Media Marketplace? IMM NYC 2020
Who Wants to Sleep in the "Mansion in the Sky?"
Amused in Amed
WSGT 2015 Gratitude Writing Contest Winners

One response to “Matt Goss in Beverly Hills at Spaghettini”