Let the Games Begin in Greece 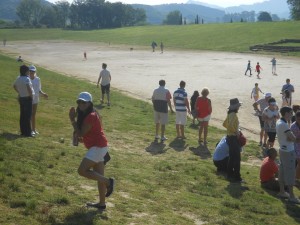 Our ship was scheduled to dock at the seaside town of Katakalon, situated off the Ionian Coast, at 9am. Referred to as the “gateway to Olympia” the town often gets overlooked as most visitors use it as a passage to ancient Olympia – the birthplace of the Olympic Games.

It was the fifth stop on our Mediterranean cruise and each time our feet touched land we looked forth to each new place with renewed expectation.

It was an early start for us, since the ship was scheduled to leave the port of Katakalon at 1pm to set sail for Croatia, so we only had a few hours to soak up as much Greek culture as possible.

Once we disembarked, we waited for our bus which would take us to Olympia. I noticed seagulls flying low overhead; took a deep breath of the crisp morning air and just felt an absolute sense of bliss.

Katakalon appeared to be a peaceful little town which consisted of just one main road, a waterfront laced with cafes and stores and a few beautiful beaches. It was really early and it seemed as if the town was still waking up; shop keepers were opening their doors, sweeping the front porches and carrying tables and chairs outside, seagulls were pecking lazily at the sand and the pristine beaches were deserted.
I thought that we would get to spend some time in Katakalon, at least to enjoy a cup of tea at a café, but we boarded the bus almost immediately and began the 40 minute journey to Olympia. As we got deeper into the journey, we passed some scenic views of the Greek countryside, complete with rolling cornfields and acres of olive trees.

We arrived at Olympia and the bus dropped us off at archeological site at the foot of Kronos Hill.

The surrounding area was very quiet, apart from the excited tourists; the only other sign of life was a lonely looking hotel across the road. We had a short walk to the Olympia Archeological site and purchased tickets from the ticket office for the site and the museum. Our excitement began to soar– we were going to the place where the Olympic Games began!

As soon as we entered the site we were immediately transported back in time to 776 BC. We were surrounded by dusty pathways, strewn with remains and ruins. Massive pillars lined the pathways, welcoming us, as we walked into this magnificent piece of History.

We were given a map of the area, which contained numbered and clear explanations of each site as well as the brief history behind it, so we didn’t even need a tour guide.

It was quite a large area and it took us the better part of the morning to navigate our way around everything. It was a wonderful experience to witness these structures first hand. I used my imagination to envision what they would have looked like in their glory days – magnificent structures, athletes milling around and excitable cheers erupting from the crowds.

The Ancient Greeks had given the world a great gift.

Some key sites included the Temple of Zeus, which once contained the 12-meter-high gold and ivory seated statue of the Greek God, the gymnasium where athletes trained, the hippodrome; which was used for horse and chariot races, the stadium where the games were held and the Temple of Hera – this is the site where the Olympic flame of the modern games is still lit (using a parabolic mirror and the sun) and then transported to the host country.

We came up with a clever way for us to remember every structure in our photos, (since everything lay in ruins and looked similar) we would pose in front of the site and do an action that was relevant to that location, e.g. for the church, one of us would stand with our hands together in prayer position, or for the race track we would do a standing running man.

Almost an hour had passed and we made our way to the archeological museum of Olympia, which was behind the archaeological site. The museum housed most of the ancient artifacts, sculptures and figurines found on the Olympic grounds during excavations. We spent about half an hour in the museum and walked back to the bus stop to get back to the ship.
On the return bus trip, I still had goosebumps from what we had witnessed, a piece of History, something so humble and unpretentious that had made such a massive impact on the world, and still continues to influence present day western civilization.

I smiled to myself and thought that this is what gets me excited about travelling – the bug had bitten and I would happily be infected for the rest of my life.

About the Author:  Tejal is a Manangement Consultant, who loves to travel the world. She enjoys practicing yoga, watching football, experiencing new places and cultures, writing and spending time with friends and family.

The Peace of Green: Slovenia
My Grand Canyon in the USA
Memories galore on the beach in India
Captivated In Bogota, Colombia