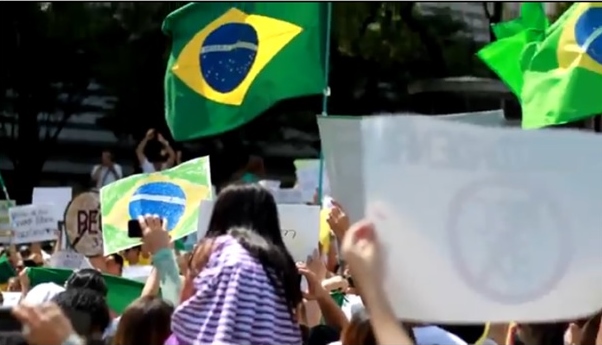 It wasn’t until the Japanese cover band performed “Stand by Me” that the Brazilian flags were raised, a blaze of electric yellow, green and blue waving gloriously against the clear skies of Nagoya’s late afternoon sunshine. Seated on a picnic table in Japan’s Central Park with a plate of yakitori, I watched as sixty or so men, women, and children dressed in Brazilian colors, some with painted faces and many more with flags, filtered onto the dance floor. As they linked arms and swayed, hundreds of Japanese passersby, perusing through the area’s renowned high end fashion strip, paused to watch.

Six months into my eighteen-month stay in Nagoya, Japan, during which my husband was to work and I, having left my corporate HR job, was to write, I was used to being one of the only non-Japanese of thousands on any given day. I had done my research prior to packing up my Detroit home and moving halfway around the world, and knew that in a country of nearly 128 million people, 98.5% were of Japanese ethnicity, followed by 0.5% Korean and 0.4% Chinese.

So where were all of the Brazilians coming from? And why were they carrying flags?

Thankful for modern technology, I quickly Googled “Brazil holidays”. Nothing. A soccer game? Nada. Brazilians-living-in-Japan day? Nope. As the song reached its conclusion I noticed some of the women had tears in their eyes. Many people were holding signs that read “Força Brasil”. But it wasn’t until several figures walked past in the white plastic protest masks I had seen on news the world over that I knew the gathering was political. Rather than speculate, I made my way through the crowd to learn more.

I headed towards a kind-looking man about my age who had a flag wrapped tightly around his shoulders.

“Hello!” I shouted over the music. “Do you speak English?” We were in Nagoya, after all, where very little English was spoken.

“Ha! Do I speak English!” He elbowed his friend, who laughed. Did that mean yes?

“What is going on here today? I am interested to know.”

“Today, here, well….” He trailed off into a series of Portuguese words. He then flagged over a friend from the dance floor to serve as interpreter.

A woman with long beautiful hair and high arched eyebrows, also in her early thirties, communicated the reason behind the patriotism.

“In Brazil is bad right now. We love Brazil as our country but we move – to here, to U.S., to Europe – for better education, for wages, for healthcare. The government, they hike fares, they spend millions on the World Cup and we Brazilians, we just grow poorer. The peaceful protests today, is to support the movements that is occurring in Brazil; we will always fight for our country. It is sad, because we want to stay in the country we love, you know?” 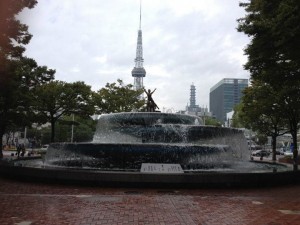 I nodded, thinking of my own family’s history and sacrifices. My father’s paternal grandparents had fled Hungary for a better life in America at the turn of the twentieth century, and my mother’s paternal grandparents had made a harrowing, blind voyage from conflict-ridden Macedonia to Detroit in 1919. If it weren’t for the courage of my ancestors, for their faith in the opportunity and prosperity America afforded, I may never have known the independence and freedom of the life I had grown to love, a life that had taken me all the way to Japan.

But how had so many Brazilians come to live in Japan, a country notoriously tight-lidded on immigration?

I was surprised to learn I had it backwards – it was the Japanese that had first moved to Brazil. About a century ago, the woman explained, many Japanese migrated to Brazil to work as labor on farms. They stayed and raised families, and when in the 1990s the Japanese government was looking for laborers, the Japanese-Brazilian population began returning to Japan to work in industries. As my great-grandparents had done, in a time of economic hardship, these people had bravely left their country in search of a better future.

And what did força mean?

Força meant force. It stood for strength, passion, energy, power. It stood for the effort of the people. It also meant “hang in there.” I knew what it was like to feel like a stranger in a strange land, far from the place you called home. Like the group in the park that day, my ancestors, through their bravery, had afforded me the freedom, the choice, to move or to stay. I followed the woman into the circle, knowing that while change does not happen overnight, the more voices that join the movement, the louder those voices are heard.

About the Author: Shannon Guerreso is a writer, an inventor, an entrepreneur and a world traveler. A Detroit native, she currently resides in Nagoya, Japan, where she is working on a collection of short stories and a variety of narrative nonfiction. She blogs about her life in Japan and other travel experiences at sashimiandthecity.blogspot.