Italy: How to Relieve Cold Symptoms 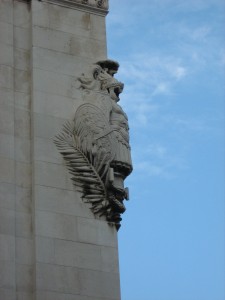 After landing in a distinctly European airport—large, with signs in Italian, and with the feel of a train station—we got loaded into a taxi and sped off onto the crazy Roman highway—small cars everywhere.

Two women we were sharing the cab with were angry with the driver—apparently he’d been driving them around all over the city, picking up other fares and dropping each newcomer off before them. We gave the women sympathetic glances—as we were taken directly to our hotel. I shut the sliding door on loud whines and disbelief.

At the front desk, two German men were asking the concierge for a vacuum. He said he had one, but why was it so urgent?—the rooms were vacuumed every day, he explained.

The Germans insisted. They had a baby in their room who was congested.

Professionalism is valued in Italy.

Meanwhile we had checked-in and we left the lobby without finding out what happened to the baby or its two “caregivers.” I wish I had stayed. So far Rome was an equal mix of beauty and insanity. 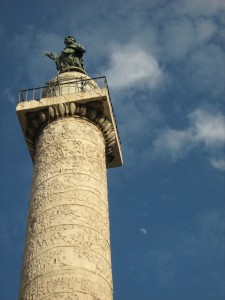 We took another cab to the forum to meet our tour guide. The driver had a depressing attitude towards the future of Rome and Italy; he told us how the mafia was ruining the country.

We asked him if he’d ever been to Canada. He said he hadn’t, but he wanted to visit someday, mostly to see an Indian reservation. We didn’t encourage him. He turned a corner into a large roundabout and the impressively white Victor Emmanuel monument appeared. We learned that most Romans hate this building. They say it is ugly, but mostly it is because of its ties to Mussolini that they despise it.

The forum was inspiring. Having the feeling that I was walking where Caesar had walked, or where the Vandals and Visigoths had once marauded, was an overload of historical humility, which is one thing absent from Canada. We have history, but not everyone is aware of it. In Rome, history cannot be ignored. I think living in the shadow of Caesar and Augustus gives everyone a natural humility and respect that is lacking back home. We pay little respect to our heroes.

As the group took a washroom break I sat on a sun-washed bench, watching archaeologists cataloguing. For all I know now archaeologists just step over fallen columns and doodle on notepads all day. It seemed like a good job to me.

Our tour guide was beautiful and intelligent. She came and sat with me and I felt shy, even though I wouldn’t have been were we back at home.

“It’s beautiful, yes?” she said, her voice like licking olive oil from a jar, hoarse like a man’s but bitter and lovely like this country. And she sounded British too, which I loved. Everyone who speaks English in Italy has both an Italian and British accent, making them sound foreign in two ways. 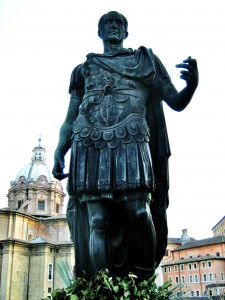 So I let at least one travel fantasy slip away, while she asked me to repeat the way I said senate. For her, the e was not silent. I told her it was a harsh word and not rhythmic, like it was in Italian.

As the tour continued, she walked with a bounce in her step so we could always pick her out from the crowd, though that was no problem for me. Every time she mentioned the senate she looked at me and smiled. The first two times, she tried to say it without the e sound and turned to me for confirmation. I nodded. The t sound was still not hard enough, but who cares, I thought. Her way sounds better.

She ended the tour at the arch of Constantine. It was sunny and dry through the empty doors of the coliseum, just across the street—dozens of multi-racial tourists with dozens of cameras climbed stairs and chatted. I wondered if those Germans were there. I could ask the guide how she would get a baby’s nose unplugged.
With a dustbuster?
Would that get me a pity date? I hoped so. A pity date here would be the date of a lifetime.

About the Author: Stephen Koster was born in an igloo and raised by wolves, who taught him the customs of his forest kin. Eventually he made his way down to Ottawa, where he thought he might try living with people for a change. He enjoys cooked meat and running water. Find him on Facebook.