Ireland: More than meets the Eye 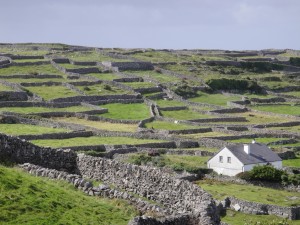 Ireland: More than meets the Eye

The gravestones appeared to have the best view on the island. Comfortably nestled in the long, wild grass, they overlooked the ever-changing sea. It seemed a grand spot to while away eternity, at least from the perspective of a landlocked girl from Illinois. I gave in to a soulful sigh, resisting the urge to sink down and plant myself next to the nearest Celtic cross. No doubt I was still feeling the effects of the boat ride over.

“Only 30 minutes by ferry from Doolin,” were my husband’s encouraging words when he presented his plan for a quick detour away from the Irish mainland. Although I was prone to motion sickness, the carefree adventurer in me longed to visit Inisheer (Inis Oírr), the smallest of the Aran Islands. So I let him choose a B&B for the overnight and said nothing to dash his hopes. My evil twin, the stark realist, knew better and whispered that the journey was probably 25 minutes too long.

I decided it was simply going to be a battle of mind over matter. When we arrived at the dock early, I thought that dwelling on the sound of the water slapping against the small white hull of the Queen of Aran would be counterproductive. So I left my family to snap some photos while I dashed over to the shops. I was looking for something that would bolster my spirits; and in the second shop I entered, a long black sweater in a soft Merino wool began calling my name.

I folded my old jacket to put in the bag the shopkeeper had given me and donned my new sweater, hoping that it would strengthen my resolve to keep my lunch in my stomach where it belonged. Once we were below deck and on our way, I found out I was as grateful for the comfort of the sweater as I was for the plastic bag it came in.

Despite the reviving pot of tea provided at the B&B upon our arrival, I still wasn’t feeling quite myself as we headed out for a walk. However, I was beginning to think that maybe my strange mood had more to do with the island itself. It was the first week of September and the landscape was desolate, but not in a bleak way. It was windswept, dramatic and somewhat mysterious.

Our tiny guidebook, printed in both English and Irish (the spoken language on all three islands), listed a population of around 250 on this less-than-three-square-kilometer island. Remembering an internet search that documented more than 5,000 years of habitation, I realized why I felt so disconcerted. I was trying to reconcile the incongruity of this small island culture alongside the history of thousands of years of civilization. Intimacy and enormity all in one fell swoop!

My map indicated that my sons were exploring the ruins of a 10th century church. Close by was another graveyard—a burial mound that dated back to the Bronze Age (1500 B.C.). Further sightseeing turned up a lighthouse from the 1800s, the rusting wreck of a freighter from 1960 and a contemporary arts centre, converted from a weaving factory in 2000.

This historical hodgepodge was as dizzying as following the maze of stone walls that dominate this land barren of trees. Thousands of years ago the area was blanketed with forests that disappeared to become fuel and building material. The islanders discovered too late that the tree roots also had the important job of holding the soil in place.

Wind and rain began to sweep the land back down to rock and sand. Careless but resourceful, the inhabitants started the slow process of creating new soil from a mix of beach sand, seaweed, fish meal and manure. They used the more fertile patches to grow crops, and the less fertile grasslands were reserved for grazing. In order to plant, the land needed to be cleared of stones. Building dry stone walls (made without mortar) also protected the thin layer of soil from the harsh weather.

Solutions… That got me thinking about my little problem. As I boarded the boat for the return journey, I approached the captain to explain my predicament. He smiled good-naturedly and told me that below deck was the last place I wanted to be. Also, I was not to look down at the water. I needed to sit topside, focus on the horizon and enjoy breathing in the fresh air. Armed with sunglasses to combat the glare, a long scarf to ward off the chill and a breathtaking view of the Cliffs of Moher on the horizon, success was finally mine!

About the Author: Andrea Isiminger has spent the 21st century living in Madrid, Spain with her husband and two boys. Originally from Chicago, a sweeping view of that famous skyline across the television screen can still make her heart skip a beat.

One response to “Ireland: More than meets the Eye”