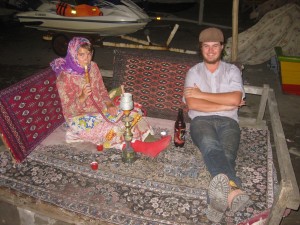 As the fourteenth country of the forty three that we would visit on our drive from Australia to Scotland, Iran was exciting and new; experiencing so many different ways of life in such a short period of time though we were becoming very used to adapting to cultural habits that we would usually find uncomfortable and social norms that ordinarily we would consider wrong or rude. Having already been in Iran for a couple of weeks I was becoming somewhat used to the ordeal of covering myself from head to toe, despite the dry summer heat, but on arrival in Tehran I wasn’t quite prepared for a ride on the metro.

There were women’s only carriages and uni-sex carriages on every train, as would be expected. Most women travelled on the women’s carriage, but there were always a few travelling with the men for whatever reason. For ease of navigation, and of course just for the sake of company, I chose to board with my male companions and ride the uni-sex carriage on our first metro outing.

After we squeezed on to the already packed train, another hoard of travellers forced themselves on. The density of people traffic on the Tehran metro is certainly not something that can be compared to anywhere ever in Australia, but having previously caught public transport in Paris, Shanghai, Bangkok and plenty of other world renowned busy cities, I can honestly say I’ve never seen anything like this. I was lifted from the ground by the force of the crowd and breathing through the stench of BO, breath and aftershave was certainly a feat.

At one station the wave of bodies jostled and swayed and I realised that a man whose face I couldn’t see because of the other men standing between us and the fact that my head was awkwardly squashed to be facing the other way, had his arm which had been tangled up in the throng and wrapped around some other torsos, strategically resting on my body about 10cm below my chin. Unable to reposition myself in the slightest there wasn’t much I could do about it, so for the few minutes until the next station I stood there with this stranger’s hand conveniently cupping my body part until the train halted at the next stop. The crush of bodies violently surged as the carriage doors opened and the hand was washed away along with the bodies which had surrounded me, only to be replaced by a new rush of commuters. I decided to give the women’s carriage a go on our next trip.

The women weren’t quite as smelly or as pushy and there was marginally more space. Where the men’s carriage had felt cold and faceless, the women’s carriage had an air of frivolity and liberty about it. They were all very jovial with each other; it felt as if the whole carriage was occupied by one group that was travelling together. I was still stared at, but more out of interest than disdain – at least that’s what I’m happy to believe. I really enjoyed the sense of community and freedom that I saw in these women, the single sex train carriage being their sanctuary. I never travelled with the men on the train again.

Philippines: Nagsasa Cove
Finding Hope and Hospitality in the West Nile
America: Our Freedom
Manchester: Alone Away From Home