India: My Karma Ran Over My Marriage! 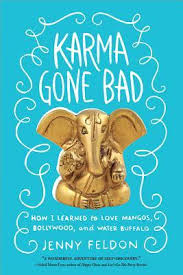 In Jenny Feldon’s novel, Karma Gone Bad, she shares losing herself among the sights, sounds and overwhelming smells of India. Through her tumultuous stories of making life work overseas as a newlywed, she nearly channels Carrie Bradshaw from “Sex in the City” if she appeared in Eat Pray Love.

Feldon knows she is a New Yorker through and through; her essentials to carry-on the plane to Hyderabad are “four pairs of designer shoes, two hundred manuscript pages of my novel-in-progress, an assortment of cocktail dresses and a small white Maltese named Tucker.” Her husband, Jay, has a professional opportunity but what will Jenny do? As the twenty-seven year-old recounts, “My wanderlust was satisfied with a ride on the R train to Brooklyn. Ashrams weren’t really my style. I lived by Zagat, not Lonely Planet.” As a long-term traveler, I wondered how would Jenny and Jay adapt?

They initial impressions were not surprising. As she said on arrival, “we stepped out of the airport and into absolute chaos. I felt like an exotic zoo animal on display, but with no cage to protect me from the tidal wave of aggressive curiosity.” For our three months in India, several people told me, “You will love it and you will hate it.” Feldon’s voyage definitely started with hate. As she wrote, “My clothes were wrong, my communication skills poor, my sense of direction unreliable. I hadn’t even so much as glanced in the direction of my computer.” Her early hopes of being the perfect housewife and writing every day are daunted by the drama of life in India.

The beginning is very challenging. She yearns to believe in herself as an expat, “What could be more exciting, more sophisticated than becoming a seasoned traveler, a citizen of the world?” but wallows:

“Here, I was no one. A parasitic extension of my husband, a hanger-on in the world of corporate transplants. What if we never got used to it? What if it got worse instead of better? What if saying yes to the greatest adventure of our lives was really the worst mistake I’d ever made?” Wondering and worrying if it will ever get better dims her ability to be a good wife and friend.

At some point, she learns her new friend, Alexis, is also having trouble adjusting and in her relationship. When she is honest, she realizes, “Some days I think Jay might be sorry he married me.” Feldon candidly shares her troubles and her eventual triumphs. “Spending entire days being stared at and misunderstood— ignorant of the language, ignorant of the culture—was making the old, charming me disappear. Frustration and bitterness hung over my head like thunderclouds, coloring my moods dark.“ Learning to live on another continent with constant power outages, monsoons, lack of conveniences and misunderstanding take Feldon to the edge of the abyss, watching her climb back to personal and professional success is heartwarming and inspirational.

At first in India, she could not get grounded. She felt, “Infamous and invisible at the exact same time. With no familiar world to tether myself to, I felt like a broken balloon in the sky, spiraling toward the earth in a free fall, desperate for a gust of wind that would lift me up again. In Hyderabad there was no pyramid, no supporting cast of loved ones to keep us afloat in a sea of uncertainty. All those people were thousands of miles away. “ Most people live their lives without questioning what is important. Stripped away from family, friends and familiar surroundings Feldon must decide what are her priorities and fight for them.

She chooses to “Love it for what it is” her new mantra for her marriage and her life. She realizes, “It may not have been the journey we planned for, but it was still the experience of a lifetime.” Sometimes life is like “one big burnt, misshapen cookie—delicious in spite of its imperfections. Or maybe because of them.” I highly recommend Feldon’s voyage as an expat, as a newlywed and as a guide for finding your way.