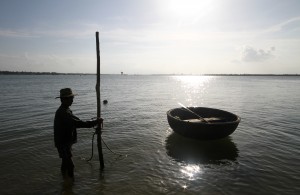 Prolonged exposure to the frenzied pace of Southeast Asia’s mega-metropolitan areas is perhaps best remedied by a detour to Hoi An in central Vietnam. In addition to the beautiful Cua Dai Beach showcasing views of the Cham Islands, the former port trading center offers a picturesque and historic, UNESCO-designated downtown featuring centuries-old Vietnamese homes, museums and even a 16th century Japanese Covered Bridge. The sagging wood homes, several of which are still occupied by descendants of the original occupants, provide an intriguing look into traditional Vietnamese architecture and culture.

A destination’s most memorable charms, however, can reveal themselves through unexpected detours, as I discovered one afternoon during a quest to photograph the abundant rice paddy fields on the edge of town.

From the soggy fields, I steered my rented one-speed bicycle to Cua Dai Beach and then, on an impulse, turned right, pedaling about 4 km to the lighthouse and boat docks. Aside from the occasional boat tour, there is very little in this area of town to attract the average tourist, so non-natives are scarce. This was the “authentic” Vietnam I so desperately wanted to photograph.

I positioned myself on the edge of a dock and spent the following hour photographing the fishermen as they leaped from brightly colored bows onto the concrete to file paperwork. Seemingly amused by my presence, the fishermen smiled and waved at me. Some asked where I was from, giving me thumbs up when I felt brave enough to utter, “America.”

Despite the friendly nature of the fishermen, I could sense the port official was growing tired of the distraction. I decided it was time to inspect the adjacent jetty and so pushed the bicycle onto the sandy spit of land leading in that direction. There I encountered an elderly, bare-chested French tourist who admired my camera gear and informed me that if I followed the water line, I would soon come across some cast-net fishermen who might let me photograph them as they hauled in their catch.

Sure enough, I found a waterside lean-to and its occupants: a stick-thin, glassy-eyed fisherman, his smiling wife and their grown son. None of the three spoke a word of English, but they welcomed me into their home, showing me the exposed, straw platform where they slept and the scale they used to weigh their catch. From somewhere unseen, the woman produced unopened packages of cookies and sesame sticks and offered me some. I deduced the store-bought snacks were a special luxury and felt honored to share them.

By writing in the sand, the fisherman indicated he was 65 years old and his wife 62. I traced a “30” in the sand and pointed at myself. Then, because I suddenly felt awkward and didn’t know what else I could easily communicate, I turned the LCD screen of my camera in their direction and scrolled through the pictures I had taken of the fishermen at the dock.

The woman grew excited when I pointed to an image of an odd, bowl-shaped dinghy. She motioned for me to follow her out onto the beach to the base of a giant, handmade reel. She pointed up, instructing me to climb onto the raised platform behind it. We sat side-by-side, our legs dangling off the platform, and she demonstrated how to pull the spokes toward me and then shove them downward with my feet. Eventually, our efforts caused a massive net – large enough to easily wrap a Fiat — to surface just offshore. The work became more difficult, the sodden netting heavier and heavier with each rotation of the reel.

Halfway through our hauling, the woman scrambled down from the platform and motioned for my camera to take a picture. At first, I balked.

“This family has next to nothing,” I thought. “What if she runs off with my camera?”

But then I gave it to her. She snapped a few (surprisingly good!) shots of me in action and then passed the camera back with a smile. More trusting now, I left most of my photography gear on the beach with her as her husband rowed the two of us out to the net in his own woven bowl boat so we could collect the few wriggling fish suspended there. My gear was all there when I returned. Of course it was.

Back on shore, I thanked the trio for their time and generous hospitality by leaving a 100,000 VND bill, the equivalent of $5 USD. It didn’t amount to much, but the woman’s smile and glistening, grateful eyes said otherwise. I instantly wished I had offered more. I still do.

Pangasinan, Philippines: Being Adventurous!
To Iceland, with Respect
Welcome to South Africa
Milan, Italy: The Freedom of a Million Books