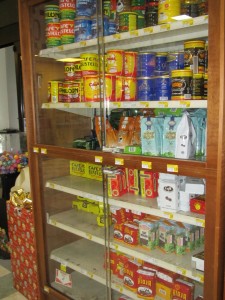 West Side Story made me want to be Puerto Rican.

I discovered the show in my 7th grade musical theater class and listened to the soundtrack obsessively. My favorite character was Anita, the fiery Latina with short hair and frilly skirts that she shook around her knees when she danced. For our final class project, I performed the song “A Boy Like That” as Anita with a friend playing Maria.

“A boy like that, he keel your brrrother,” I bellowed, trying to compensate for my white Long Island-ness with extra sass. Puerto Rico seemed exotic but in a comforting way, like mashed potatoes with a hint of chili.

I didn’t go Puerto Rico until eight years later when I went to visit my boyfriend Adrian’s family who lived in San Juan. I had long outgrown my West Side Story obsession, but I still got a rush when I stepped out of the airport and the humidity draped over me like a warm, damp towel.

Adrian spent that week showing me some of Puerto Rico’s most popular attractions. We toured the Bacardi factory, swam in a waterfall in the El Yunque rainforest and walked the cobbled streets of Old San Juan. What I enjoyed most, however, were the regular, everyday aspects of Puerto Rican life that he showed me, things that I would have missed if I came as a tourist. For example, I liked going to Pueblo, the supermarket where the coffee was kept in a locked case.

“When the economy is bad, coffee is the first thing people will steal. We can’t live without it,” Adrian explained.

I liked going to the gas station to pick up pan sobado, a sweet, soft bread that’s perfect for fried egg sandwiches, and battling crowds of women at the Plaza las Américas mall who dressed better to go shopping than I dressed ever. I liked sitting outside at night and drinking red wine while I battled the mosquitoes with an electric racket, delighting in the satisfying sizzle it made when I got one.

My Spanish wasn’t very good anymore. I had studied it in high school but hadn’t used it much in the past few years. That didn’t stop me from reading every sign we passed with enthusiasm.

“Hatillo. Aquadilla. Mayagüez,” I shouted as we drove down the highway. I loved the way the words rolled around in my mouth and jumped off my tongue. It was as though they were begging to be said dramatically.

In many ways, the tropics didn’t really agree with me. No matter how much sunscreen I put on, I always missed some spots and ended up with red, angry-looking stripes across my body. I sweat constantly, even when I wasn’t moving. My wavy hair quickly became frizzy. But there are some things that are more important than unblemished skin and nice hair, like being able to drink out of a coconut that you just cut down from a palm tree with a machete. The machete is considered a weapon in some places, but here it was a practical tool, no more out of place in the kitchen than a bread knife. One carefully-laid crack was all it took to split the hard shell of the coconut and expose the sweet, slightly sour water that was hidden inside.

Adrian and I are married now, and I have been to Puerto Rico at least half a dozen times. Each time our plane lands in San Juan everyone claps. No one ever claps when we land in New York after our return flight, but there is something about Puerto Rico that makes you want to show your appreciation for being there. I join in with the rest of them, clapping my hands together until they’re stinging and red. Gracias, my hands say. Gracias, gracias, gracias.

ABOUT THE AUTHOR: Katie Lee is a web content developer from New York who now lives in Scotland. When she’s not traveling, she’s writing short stories, cooking vegetarian food and running around at the gym.