Why You Should Go to Melaka, Malaysia – Video

As everyone passes through Kuala Lumpur — either for a few days of sightseeing, dealing with visa issues or simply stopping by on the way to fly to somewhere else — Melaka, it’s little brother to the south, often gets overlooked.

It’s not a city in the traditional, busy sense. There’s this sense of history and charm that breathes through the place and keeps you captivated for days (or weeks if you let it.) Life passes at a slower, deliberate pace and while you’re just about 2 hours from the traffic and hawking and noise of Kuala Lumpur, you may as well be worlds away.

So what makes this Southeast Asian gem so unique?

According to the locals, this is your #1 attraction in Melaka, and they have good reason behind that claim. Melaka has some of the best food I’ve had in Southeast Asia, and definitely in Malaysia. In Melaka be on the lookout for laksa. 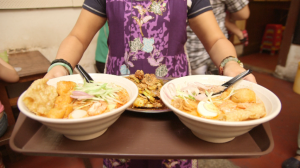 Largely because of its premium geographical location right along the strait between Malaysia and Indonesia, Melaka has been a meeting point for several cultures to converge. One of the more notable communities is the Nyonya Baba – descendants of Chinese immigrants who have intermarried woven culture and customs with the native Malay. This group took the typical Malaysia dish of laska – a spicy noodle soup – and put its own regional spin on it. Baba Laksa is spicy with a good portion of coconut milk in the broth, while Nyonya is a bit more sour. Local haunt Jonker 88 specializes in a Baba Laksa Kahwin Nyonya Asam Laksa, which is an incredible mix of the two.

Colonial Satay is also a popular local haunt because of its secret family satay sauce. Be prepared to wait for up to 3 hours for a table though!

Every Friday and Saturday night the main street transforms into an amazingly busy and festive night market. There are food stalls everywhere with all-things-fried, soups, noodles and laksas and even a sushi cart. The street is contained by two must-see attractions. At one end (nearer to the Tourism office) there is a man who can poke a hole in a solid coconut with his finger, and amasses a pretty big crowd each evening at about 8:30. While it’s a bit of a bike ride (though easy to find,) the Melaka Straits Mosque is a massive, open-air building that peers out onto the ocean from its own man-made island. It’s built on stilts and appears to be floating on the Strait itself. Weekends tend to attract more visitors, but on a weekday you could have the place to yourself, dwarfed by the vacuous cavern with nothing but open water ahead.

The Strait of Melaka itself is one of the busiest waterways in the world, with nearly 90,000 vessels passing through annually between the Indian and Pacific Oceans. If you’ve got good weather one afternoon, there’s a small stretch of beach near the mosque where you can sit and watch the ships go past as the sun sets over the strait.

Known as the Red Square, it’s the oldest remaining Dutch site in Asia, and offers a beautiful view of the city and out into the Strait of Melaka. Parallel to the popular Jonker Street is Melaka’s own Chinatown. Unlike the Chinatowns of places like Singapore or Kuala Lumpur where hawkers are dangling fake Ray-Bans and Beats headphones in your face, Melaka’s Chinatown is quiet and full of culture. It’s home to the oldest Chinese temple in Malaysia and the only shoemaker in the world who still makes the shoes worn when foot-binding was still heavily practiced in China (as souvenirs!) There are also several stores that sell cardboard affects like houses, golf clubs, cars and money that some Chinese will buy and burn all together in a box for passage into the afterlife. 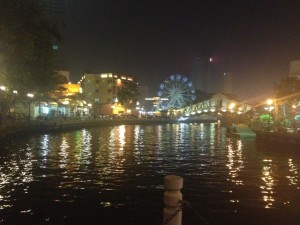 The Melaka River bisects the town as it spills out into the strait – and each riverbank is lined with quaint cafes, churches, mangroves, villages and old historic buildings.

Boat cruises go along the river all day until about 10PM for 15MYR a person, but you can also hire bikes from many hostels and shops around town and bike along the banks.

With its deep-rooted Islam, Malaysia isn’t really a party-center to begin with, but Melaka has its nice local haunts. At the Jonker Street Market and any hawker centers, locals will be sitting around sharing beers late into the evening, and sleepy bars are dotted around town. If you’re looking for a true dive, check out Shantaram on the same road as Chinatown. Touting “hours of beastness” from 9-2, its outer décor is a prelude to the personality of the place.

Enjoy more about Melaka in our city overview video!

Don’t Stay Put is a new kind of travel blog featuring high-quality, professionally-produced videos about the culture, sights, food and everything else we encounter along the backpacking trail, all as told by the travelers and locals themselves.

Why Didn't We Watch the Olympics This Year?
The Best Four Ways to Tour Central Park
India: There's Something About Lord Buddha That ...
Philippines: Caves, Coffins and Clouds

Leslie Finlay is the writer and producer at dontstayput.com, a new kind of travel blog with high-quality, professionally-produced video content featuring the culture, sights, food and everything else we find along the backpacker trail, all as told by the travelers, locals and ex-pats themselves.

2 responses to “Why You Should Go to Melaka, Malaysia – Video”