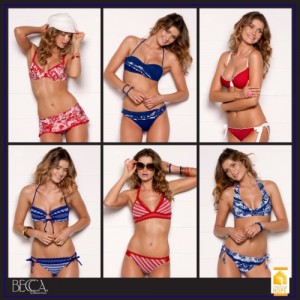 Owning a bikini from the 2012 Wounded Warrior collection from Becca Swim has been a good choice for me. The tag says, “Your Becca Swim purchase is making a difference in a warrior’s life.” I have only owned suits from Becca for the last eight years since I first tried one on at Everything but Water. Honestly besides my passport, kindle and laptop, my swimsuit might be the most important object in my backpack.

Becca Swimwear committed to support Furnishing Hope with their 2012 swimwear collection as a way to improve the lives of families and help to provide a healing environment. I chose them because they have the best fitting suits but I also feel impressed by the character of their choices.

Where Do You Find Freedom? July 4, 2013 from Lisa Niver Rajna

In the movie Jack Reacher, Tom Cruise’s character has chosen to live outside the lines that many take for granted. He tells us:

Look at the people. You tell me which ones are free. Free from debt. Anxiety. Stress. Fear. Failure. Indignity. Betrayal. How many wish that they were born knowing what they know now? Ask yourself how many would do things the same way over again, and how many would live their lives like me.

Can a character like Jack Reacher show us the way to independence? Is Steve McGarrett (Alex O’Loughlin’s character on Hawai-five-0) able to lead you to responsibility? McGarrett (in Season 3 Episode 20 “Olelo Pa’a” which means “The Promise”) returns to North Korea to bring home a fallen soldier. He must step outside the lines to do the right thing for his friend and his family.

What will you fight for? When do you color outside the lines? Share your story about where you find freedom. It may be a place near to your backyard or on another continent. Which of your passions have you had to defend? I hope you are proud of your choices or find the courage to start to stand up for what you believe in. We are waiting for you.

Culver City: Eating at Sāmbār is like traveling to India
Time to Take Care of Yourself
5 Reasons to Buy Insurance When Going on a Cruise
Ready for a Risk? IndependenceTravel Writing Contest is OPEN!