From Iguaçu I travel west over the Andes and beyond, over one of the emptiest stretches of water on the planet, en route to Easter Island, a fine dot on the map of the Pacific. If Iguaçu is full presence, Eastern Island is absence. Fretted by incessant winds, it is surrounded by a million square miles of open sea. And the nearest solid land you can see from here… is the moon.

This tiny rock in the middle of nowhere, on the way to nowhere, has bewildered and beguiled explorers, scientists, artists and visitors for centuries. But only its solitary stone sentries, some standing, some fallen, know the island’s real story.

Wonder is what provokes through opposition of what makes sense, and so little makes sense here. It’s a twisted plot that turns on creation and destruction; a whodunit; a cautionary tale… and one of the greatest unsolved riddles of all time. 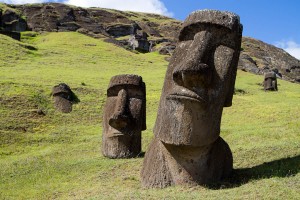 Why did an ancient people erect the massive stone figures that haunt this remote island? How did they do it? And why did such an accomplished people nearly vanish into thin air?
Answers are as insubstantial as sand. The footprints of those who once knew have long washed away. Yet we are inexorably drawn to things we don’t understand…compelled, by nature, to wonder.

Easter Island is a place to meditate upon mysteries. Nowhere can such colossal statues be found in such a small place in such great numbers created by so few people. It is the richest, most bewitching open-air museum in existence.

Many are familiar with the outlines of the story: Once blessed with bounty — flocks of native birds, a forest of palm trees and a sea abundant with life — Easter Island was, for a time, Eden-like.

Sometime in a period still uncertain, seafaring Polynesians, masters of wind, stars and current, set sail in outrigger canoes. Defying all odds, they crossed a vast void of ocean, until they bumped into this igneous spit, and then settled here, perhaps because of the fresh water source in its crater lakes. Over time, they carved and erected these great moai, the island’s iconic, brooding statues.

Then suddenly, over the course of a few short hundred years, the society buckled, then collapsed. The population shrank to a shadow, leaving only the mute moai as witness to what had happened.

Anthropologists tell us the people who settled this island were Polynesian. Archaeologists tell us the moai were carved from volcanic stone. But no one can explain why the inhabitants spent so much time fashioning the statues, and moving them around like giant chess pieces… and why they toppled them when they were done.

The island received its cartographic celebrity from the Dutch sea captain Jacob Roggeveen, the first European to visit the island on Easter Sunday, 1722.

One sailor wrote of the huge stone heads they found: “all made with skill, whereat we wondered not a little.”

Up to 13,000 people once inhabited the island, but by the time Captain Cook arrived in 1774, most of the land had been deforested, and only a thousand called it home. Like so many, Cook was amazed by what he found. “It was incomprehensible to me,” he wrote, “how such great masses could be formed by a set of people among whom we saw no tools.”
The extinct volcano Rano Rarku provided the volcanic tuff from which the island’s almost 900 moai were chiseled and carved. Archeologists think it took 5 or 6 men, using hand tools, a full year to complete each statue.

But how did they move these monoliths, some standing thirty feet high and weighing up to twenty tons? Some suggest felled palm trunks acted as rollers as teams of hundreds pushed and pulled the statues into place. Others say they were walked, as movers might walk a large piece of furniture across the room. And there are those who believe there was no human assist at all, that the statues marched themselves across the raw-boned isle.

At Tongariki stands a line of giant Moai, one crowned with a massive stone headdress. The achievement of donning this fellow’s hat might be compared with putting a man on Mars today. How did they do this? The only thing to do in the face of the incomprehensible is to wonder.

Most of the moai were felled for reasons obscured by the long shadows of time. Only recently have several been re-erected to their previous viewpoints, and the restoration work continues
Contact with the outside world was not kind to Rapa Nui, and in time the island seemed to shrink into itself. European ships brought slave traders and disease. Then there was the islanders’ own undoing, still a mystery. But by 1860, just 111 people survived and today’s inhabitants are the descendants.

After missionaries arrived on the island, much of the native culture was suppressed and, in some cases, erased, but since the 1960’s Rapa Nuian culture has undergone a renaissance. The people of Easter Island today are breathing mana, or life spirit, into their native arts, language and culture.

Controversies still rage as hard as the sea into the cliffs on this three-million-year-old volcanic spit. Theories slip past like fish in flight.

Many guesses for Rapa Nui’s early undoing have been hazarded: climate change, overpopulation, volcanic eruption, rat infestations, cannibalism, war. Though we continue to search for answers, it’s the non-answers that needle and keep us wondering. Why is this important? Because knowing begins with not-knowing.

But while we fail to grasp the narratives long vanished, there is a yearning wonder in the attempt. Was what happened here a moment of dizzyingly singularity? Or is it a crystal ball to our own future? What are the costs of our own choices? What can we learn to avoid this fate?
In recent years, tourism has boosted the economy of Easter Island. But the people of Rapa Nui well know that if the number of tourists increases past a certain threshold, the island will once again have insufficient resources to handle the growth. The people of this island are no strangers to overpopulation, and its consequences, so great efforts are being made to keep this address sustainable, in balance, for locals and visitors.

From the moment visitors’ touchdown, these efforts are noticeable. Even the offices of the island’s leading airline are designed to be green and sustainable.

The newly built Hangaroa Eco Village is based on the Polynesian kainga, or village, integrating respect for the fragile lands of Rapa Nui with a laudable cultural sensitivity.

“On the entire surface of the island, there is not a tree that merits being called that,” wrote naturalist George Forster, who accompanied Captain Cook.

No matter how the island’s trees were lost–cutting them down to move the Moai, or for building, firewood and weapons, or from a plague of Polynesian rats arriving with the island’s first settlers — thanks to work from CONAF, The National Forest Corporation of Chile, trees native to Oceania are now being introduced in an effort to re-forest land denuded for centuries.

And so, the guardianship of this once-broken island seems in good hands now, its tonic of wonders intact, and sustaining.

The wind whispers here, like the voices of carvers past. All we are left with is the magnet of mystery, which pulls travelers to this powerful place.

The mysteries lay folded in wonder. The great Chilean poet, Pablo Neruda wrote of this place: “And in this capital without walls made of light, salt, stone and thought, like the rest I looked at and left frightened by the cleanly clarity of mythology, the statues surrounded by blue silence…. Easter Island, where everything is an altar, where everything is an altar of the unknown.”

The blind eyes of Easter Island watch our comings and goings, impassively, as they always have. Most gaze inward, toward the center of this island universe; but a few look out to sea, wondering, perhaps, what lies beyond. Can they as well see across time as space, and know what is coming in the Moai’s future — in our today?

Is River Rafting Safe for People of all Abilities?
Stella Australis: Cruising Through Time at the Bottom of the World
Purple Clover: Our Sabbatical Adventure
A 12-hour crash course on Chile