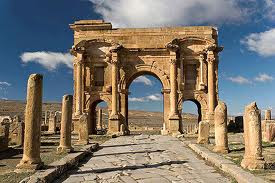 Guest Post by: Kit Herring
Few people visit Algeria anymore because of internal strife, but I hitchhiked across the country in 1975.  Theses are some recollections of the country’s greatest archeological site, the Roman city of Timgad, as they appear in my novel, Descending the Cairo Side.  Here was once an African center of empire; today the ruins are empty and forlorn:

When I arrived at the nearby modern Algerian settlement, I found that accommodations were scarce. The only lodging proved to be arather expensive hotel. But I checked in, not wishing to camp in the open.  In the lobby I found a map of the ruins.
After securing my belongings and now in astate of bemused contentment, I headed for the ruins, glad that a whole Romancity lay waiting for my investigations. A man at the gate collected a pittance as an entrance fee. It would havebeen interesting to see if the daily receipts even paid his salary. Certainly,there was not a single other tourist on site. I was completely alone at one of northern Africa’spremium archeological wonders.
The foundations of the town lay ahead, butno buildings stood higher than about three feet.  I was somewhat disappointed, thinkingfoolishly that I would wander the streets of a nearly intact city. This was anaive fancy, of course. The ruins had been picked over for centuries as asource for quarrying stone, and no doubt looters and grave robbers had long agostolen anything of value that could be easily removed.
I walked down a broad boulevard in thecenter. The dun-colored stone remains were, in their subtle, discreet fashion,magnificent.  A sense of orderliness andtidiness stood out. The city had been planned, much more carefully than wereany modern population centers in North Africa. It seemedthat the whole thing had been built from a central design.  Streets were laid in a grid, and the map Ihad showed the various public and private buildings, although it would havebeen hard to discern the function of most of the ruins.  On the surface, all was a jumble.
It didn’t take long to tire of pickingthrough the low walls. There weren’t any interesting artifacts lying about, ofcourse, and little in the way of artwork. I was surprised at how fast boredom set in.  I felt like an unsatisfied and jaded seekerof lost history. 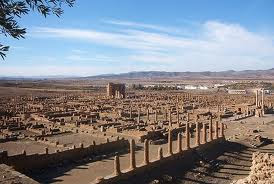 Yet the scale of Timgadwas impressive. The stone-paved streets covered the better part of a squarekilometer.   Sitting down on top of acrumbling wall, I consulted the map again to see if there were otherinteresting spots.  I had noticed, abouta quarter of a mile away, a large structure that looked like a fortress or acastle.  It had a non-classical architecturalstyle to my unpracticed eye.  What wasthat?
The structure loomed over the ruins like agiant crashed bird.  It was constructeddifferently from the rest of the city. Although much larger than any other of the stone remnants, it seemed, atthis distance, to have been put together from cruder materials.  I decided to have a peek.  It required a walk outside the perimeter ofthe Timgad ruins.  I read on my map that the fort dated fromByzantine times, which would account for its stylistic singularities.  It loomed more and more imposingly as Iapproached it.  As advertised, it indeedwas a kind of primitive castle. There was a wide entrance, some twenty feethigh, which once may have supported huge wooden doors.
The interior was dark. I pressed on, enteringthe portico, feeling my way through a great central hall.  The fortress was made entirely of small,roughly hewn rocks.  Its lines weresevere and utilitarian.  Above me theceiling faded into the darkness. Abruptly I tripped over a loose stone in the path, and a loud surprisednoise emerged from my throat.  Withoutwarning, a great host of bats swooped down from the recesses of the bulwarks,twittering and screeching their eerie cries. I ducked instinctively as theyswirled and swooped around me like miniature dive-bombers.  It was quite unnerving and I panicked,looking for a speedy exit.  They flewthrough my hair, brushing against my face. I had a flashing thought of rabidanimals covering me with tiny painful bites and sprinted for the exit. The batsdecided not to follow, but I continued running blindly for a hundred yards,finally coming to rest on the base of a column. The cries of the bats werestill audible from within the gloom.
I panted, staring back at the Byzantinefort.  This was not part of the bargain.God, bats!  I looked around the area fora time, bewildered.  The fun had gone outof this expedition. Making my way back to the ruins in the city, I attempted tobusy myself studying the vestiges of Roman life, but my curiosity had taken ablow.  It felt as though I had beenrejected by this place, that it had no connection for me.  I kicked a few stones around a small plaza,trying to decide what it all signified. I considered what I knew about Roman history.  The usual schoolboy facts.  Great conquerors, leaders, civilizers. Butthe stories from my youth no longer seemed relevant.  An idea occurred to me, courtesy of theattacking bats.  Maybe the Romans wereprecursors of a continuum of evil in Europe, proto-nazisfrom the ancient age. What had they accomplished in subduing and controllingtheir piece of the known world?  Surely,their art, literature and culture counted greatly in the progression of humanknowledge, but in the final analysis, their ruins were haunted places, theabodes of night creatures. They enslaved vast regions and peoples in theirquest for dominance.  The glories oftheir conquests had long withered, leaving nothing but relics of brutality andfear that gave proof to the lie about empires.
The legions of Romerepresented a great leap backward for humanity. The modern history books had it wrong. I walked away from the archeological site, toward the modern town of Timgad,vowing never again to set foot on Roman territory.
From Lisa and George, We Said Go Travel:
Thank you to Kit for this guest post! More from him at http://thebackpackershandbook.com/
Read about his book, Descending the Cairo Side:
http://www.wesaidgotravel.net/2010/10/hitchhiker-on-road.html
More travel news and stories from us here next week.
Want more right now? Go to: www.wesaidgotravel.com
Ready to travel? Go on the Summit this summer with the Penn Glee Club!
To see more posts go to http://wesaidgotravel.blogspot.com/

Travel meaningfully: How to make the most of your travels
Los Angeles Meet, Plan, GO! 106 of us together!
Pearls of Wisdom for a Happy Anniversary!
Holidays are here! What to gift the nature lover in your life