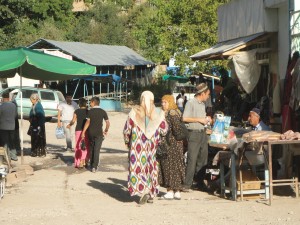 The late afternoon sun was relentless as we waited in no man’s land between Kazakhstan and Kyrgyzstan. A slight breeze came up from the river separating the two countries, so we stood on the bridge in an attempt to feel it on our burning skin. The river, equipped with sharp rocks and fast rapids was the perfect border, the gravel path on the Kazakh side too wide to jump across and graded so that any footprints were ruthlessly visible, barbed wire fences poised to greet any intruders.

It was a busy border crossing with hustling and bustling in both directions; a lot of people waiting in no man’s land like we were. We watched on as hoards of ladies stopped between the borders to get dressed into entire bags of clothing, tags still visible, nobody batting an eyelid. Every so often a border guard/army official/policeman would saunter through no man’s land from Kyrgyzstan to meet a border guard/army official/policeman from Kazakhstan. They would shake hands, exchange cash, hand over a passport or two and return minutes later to their respective posts.

As we waited the crowd suddenly became thicker, and before we knew it there was a group of about sixty people frantically pushing each other and screaming. They were alarmingly desperate, scrambling over the massive overground pipe to get onto the road, but we had no idea what the ruckus was about.

An army truck began reversing out of the Kazakh border area and into no man’s land. The crowd moved forward, thrusting themselves at the truck, and we watched in horror as the vehicle reversed into the throng, the people at the back pushing forward towards the truck, crushing all who were at the front. Did they have refugee family members inside the vehicle? The trampling and stampeding was bordering on inhumane, but we couldn’t help but be enthralled by the commotion.

The truck stopped reversing and a man dressed in an army uniform climbed out of the driver’s seat and stood aside whilst a man in civilian clothing appeared from the passenger’s side and made his way through the jostling crowd to the back doors. The group was so tightly squeezed against the truck that he didn’t seem to be able to get to them and just when the crowd was becoming uncomfortably indignant towards him, a stocky lady in a yellow t-shirt suddenly rose above the horde and with supporting chants, managed to heave herself onto the back ledge of the truck.

We watched in amazement as Yellow T-shirt and Civvies opened the back doors of the truck into the swarm, shoving crowd members into each other in the process. We really had no idea what to expect once the doors were open – were they all going to jump in to smuggle themselves across the border? Were people going to jump out? Would the truck be full of illegal goods or food products? Then Yellow T-shirt started holding up handbags, shopping bags, children’s backpacks, brief cases and other small pieces of personal luggage. For each item she held up, a selection of crowd members waved their arms and called out, presumably attempting to claim that item. Now it looked like some sort of charity delivery, but these people didn’t look like they were particularly poor and why would something like that be happening in no man’s land?

The army officer who had reversed the truck and was standing aside spotted us watching what was going on and obviously bored, approached us. To our delight we were greeted with limited English and he went on to enlighten us as to what the situation was.

“Contraband,” he spat, disdainfully gesturing to the items being tossed around in the throng and going on to explain that the Kyrgyz people go into Kazakhstan to sell their goods. “Kyrgyzstan, little money. Kazakhstan, big money,” which also explained all the ladies in seventeen layers of clothing. He ruefully told us about how they import goods to Kazakhstan every day, and every day they take more than the personal limit. Every day the excess goods are confiscated, and every day they are returned. He rolled his eyes and made a circle with his finger, indicating the vicious cycle that he, the smugglers and everyone else at the border were involved in every day.

And there we were about to leave this place behind us, continuing on our trip across the world. The freedom of our lives compared to the oppression and struggle that so many people have to deal with on a daily basis had never been more apparent to us than it was at that moment. It’s sad but true that sometimes we need to witness something awful to truly appreciate the freedoms that we are blessed with.

(Because of the sensitive nature of border areas unfortunately we weren’t able to take any photos of this experience, so instead I have included a picture of a Kyrgyz bazaar.)