I left Australia in early October to study English teaching. I felt I needed to be doing something productive while I was travelling, otherwise I would just meander around aimlessly. It would also enable me to work overseas, and extend my travels. My course started only a few days after I arrived, so I was straight into it. For four weeks, I was immersed in prepositions and paraphrases, and barely had any free time. My only advice to anyone else doing a similar course is to take one day out every week you’re studying, and do everything else there is to do on that day. 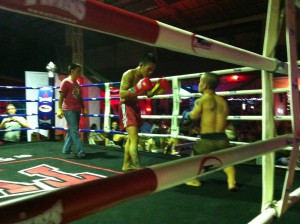 We spent our first free day exploring the mountain waterfalls and bush walks on Doi Suthep. After an early dinner, my classmate Alex suggested a Muay Thai fight to me and two of the girls. I was up for anything, and I knew nothing about Muay Thai, so off we went. We didn’t know where to go or what we needed, so we jumped in the first tuktuk we saw and shouted “Muay Thai!” at the driver. He just laughed, said okay, and we set off.

We ended up in what I guess you would call Chiang Mai’s red light district. Plenty of working ladies in the street, offering me (and the girls) a good time, with all sorts of suspect shops in dark and creepy alleys. We kept walking ‘down street, down street’ as the driver instructed us, until we thought we must’ve passed it. We asked a few locals (Saying “Muay Thai” with a puzzled expression on our face while shrugging our shoulders), but kept getting pointed in different directions. Finally, Alex led us down what he was sure was the right dark and creepy alley, and our Muay Thai night began.

Bear in mind that I was expecting to go to a big stadium and see professional fighters slugging it out to the death. The place we found was a little less classy. To me, it looked like a shopping mall food court with a boxing ring in the middle. There were little eateries scattered around, and none of the stadium seating I had geared myself up for. We sat down and ordered some drinks, and waited for something to happen.

The first fight was between what looked like two eleven year-olds. They were pretty tame to begin with, but it only took a couple of minutes to see that these kids were very well trained. A few well placed kicks to the head from Redshorts, and my trusty Blackshorts was on the ground. Redshorts took his victory lap, and it was over within minutes. That was entertaining enough, but the next fight was even more interesting.

Into the ring steps a dwarf, breathing heavily, dressed up in boxing gear and looking to fight. Me and my friends looked at each other with that puzzled/excited expression that could only mean ‘Are we about to see a dwarf fight?!?’. After circling the ring for a few minutes, we see his challenger. A fully grown 18-20 year old with a mean expression on his face, lacing up his gloves. Our expression changed into puzzled/worried as we saw the two fighters walk to the center of the ring and touch gloves. And they were off.

After watching with cautious trepidation for about half a second, it became clear to us that the dwarf could definitely hold his own in this fight. It was hard for the tall guy to hit down low, and I didn’t see him try one kick on the little man. Even by the end of the fight, it wasn’t clear who had won, and both fighters had given it their all. Finally, as they both came around together to collect money from the audience, it became all too clear far too late that the whole show had been a spectacle for the farangs (ie. us). We gave them their dues, sat back and mused on the past 20 minutes.

It was a surprising experience. Just what I expected.

About the Author: Max Philipson is an Australian traveler from Wollongong, just south of Sydney. Although he has traveled extensively as a child and teenager, he has only just begun his first solo trip around the world. He plans to teach English wherever they’ll let him, with the goal to keep heading to new places until his bank account absolutely cannot handle it any more.