Musings of a Nomad: Candidasa to the Gilis 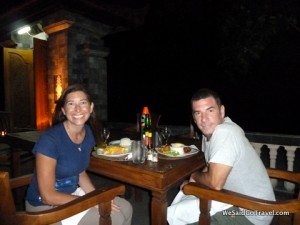 Sometimes I wake up and you think I know what your day will be like. But often I am wrong. We left Amed after staying at Bali Amed for seven nights and returned to Tulamben. George and I have a rule about not eating in empty restaurants but we had spent nearly three weeks in Amed and Tulamben and felt more like home than away. We thought we had eaten everywhere but suddenly saw one place we had never sampled.

Thus began the unraveling of Northern Bali for us. When George wondered, “Did we order fish satay?” I should have realized something was wrong. As he said later, “If you cannot tell if it is fish or chicken, don’t eat it!” If only, only we had not eaten it. But then, as in the movie Sliding Doors, if you miss the train and see your partner in an affair, you cannot un-ring that bell, just as we could not un-eat that chicken.

George and I were both so sick and we just had to get somewhere else. We picked up and fled to Candidasa where we took refuge at Aya’s Home stay (booking .com) . Just prior, I sat at Le Zat Restaurant by the sea (their rooms were $65usd) while George looked at a few cheaper places to stay. I said, “I want to go to the one across the street and sleep the afternoon away.” I hate to be sick and I especially hate to be sick when we are traveling.

Gary and Tio have a lovely hostel/hotel with thirteen rooms, which seemed more like a hospital ship during our two night stay. While I was asleep, George was chatting with the expat Aussies in their diner called, “I love Hot Dogs! No Nasi Goreng here!” We heard the people next to us coughing up their lungs — the couple in the front room—she was on day 6 of being sick and a Danish doctor and fellow traveler told her to take Cipro. Gary took her boyfriend to the apotek (pharmacist) because he gets lost easily and has a bad leg. George asked the guy,  “What happened?” and he said, “Brain damage. I fell off a bicycle.” Gary was looking after all his charges including our new friend, Adam, who broke a rib on his first surfing lesson. Gary always asked how I was feeling. I think he was especially happy to see me eating more than Sprite and warmed hamburger buns!

I highly recommend you stay with Gary and Tio. I told him, “I like the signs in the room that say Welcome and Thank you for staying at Aya Home Stay.” Gary said, “Well, we really mean it.” And they do!!

One morning George said, “Let’s go to Padang Bai and figure out the transport to Lombok.” He seemed so keen and it was a short ride so we packed our gear. It was 10,000Rp ($1usd) on the bemo (local transport) but we ended up going in a Perama van for 15,000rp each. It was slow going as the road was blocked for a ceremony. The driver said, “Ceremony.” We knew that this month had lots of auspicious days for ceremonies.  When we arrived in Padang Bai, George left me at the Perama Restaurant to investigate our choices while I ordered us lunch. We had decided to take the slow ferry of 4-5 hours to Lombok. In 2008, I convinced him to take the new Gili Cat which was about an hour-long journey direct and maybe $60 a person instead of the 5 hour slow ferry, followed by a 4 hour journey by bus north and then another boat across to the Gillis. I did convince him but he always seemed to want to relive the original journey he did to the Gilli’s and now we were doing it.

George got us tickets for the 3pm ferry. We found seats around 2:30pm and waited in the sun for the boat to depart. We helped three French tourists as they had gotten ripped off when they purchased their tickets. They paid speed-boat prices for the slow ferry. We told them to go back as they had paid nearly ten times the cost of the slow boat (and they had a receipt to prove the point). They were able to get some money back.

After a lovely sunset and nearly five hours, we arrived in Lombok. We joined 3 men from Paris and another couple from Switzerland at the transport office. We originally had the idea to stay overnight in Mataram because we arrived in the evening; we’d heard that during Ramadan many things would be open at night. But naturally we changed our plans. I thought we would stay in Candidasa, then Padang Bai, then Mataram but surprisingly we slept in Senggigi. 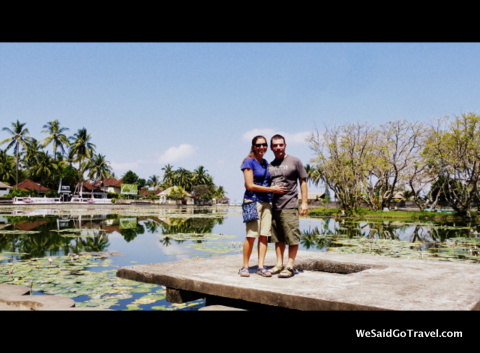 As all five of our new companions were going to the same place, we said, “We will go also.” With a fare of 60,000rp ($6usd) per person and a whole van to ourselves, we were comfortable and able to arrive quickly. Sunset House was a bit pricey for us so we stayed next door at Batu Bolong Cottages for 350,000Rp (about $35) with Breakfast and wifi in the restaurant. We were welcome to use the pool on the other side of the road (we were not on the beach side—those rooms were $70 and up) and had a lovely stay. During two nights there, we enjoyed walking to the Hindu temple, also named Batu Bolong, and watching the local fisherman. We ate our dinner under the stars by the pool and felt refreshed and relaxed although we did eat another bad meal in Senggigi.

Today, we took local transport to Bangsal and a small boat, crossing to the Gillis. In 2008 the fast boat had just begun service and the island was mostly as George remembered from an earlier visit. However, during the last four years there have been many visitors and I think Gili Trawagan is being loved to death. The coral looks dead and the fish seem gone but maybe we will find more of them in our snorkel adventures tomorrow. The island is still lovely overall but this high season it does seem quite busy!
August 14, 12

7 responses to “Musings of a Nomad: Candidasa to the Gilis”