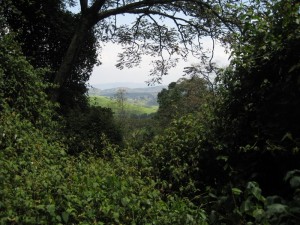 It’s odd to think of being free in a country that is still recovering from civil war. When comparing the highly developed, technological culture of the United States to the under-developed subsistence farming culture of Burundi, however, there is a kind of freedom. Freedom from returning emails because the Internet is down. Freedom from returning phone calls because the cell phone network is down. Freedom from work or social obligations because there’s a strike or roadblocks and you can’t drive across the city. We are free to sit on the porch and enjoy the beautiful view of the Congo mountains and Lake Tanganyika. When we lived in Bujumbura, Burundi, the civil war from the 1990s was technically still going on. The last rebel group signed a peace treaty shortly after our arrival in 2008. Many parts of the country were still unsafe to travel through as unemployed rebel fighters turned to armed robbery as a way to make a living. Gradually, however, more and more of the country became safe and we had the opportunity to visit some places that tourists and other outsiders had not seen in decades. 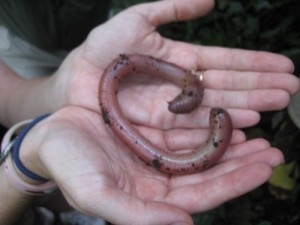 One of those places was Kibira forest. Patrice Faye, a French man who’d bicycled into Burundi decades ago and never left had become familiar with the forest and friendly with the Twa people who live there. The Twa let Faye bring tour groups through for hiking. Kibira forest was a rebel hiding ground during the war and in the years afterwards. Previously, up until the 1930s the forest had been the private hunting grounds for the kings of Burundi. After that the forest was conserved during German and Belgian colonial rule partly due to the mystical qualities Burundians had placed upon it. It is still one of the few undeveloped areas of Burundi, where wildlife runs free and cattle grazing and tea plantations are limited. A friend of ours knew Patrice Faye and so with my broken French I arranged for a hike through Kibira with some friends. I had no idea what was in store for us, not completely understanding everything he said. But we were ready for an adventure. We all met at the arranged time and started our drive from the flatland of Bujumbura north into the mountains. 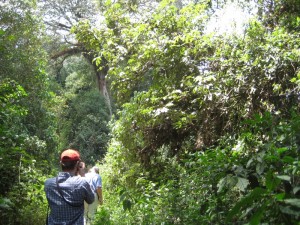 Some of the best tea and coffee in the world is grown in Burundi and after a couple hours of mountain driving, the tea plantation adjacent to Kibira came into view. We got out of the cars and had a quick lunch, then followed Patrice and his Twa guides into the tea. The plants were so thick and overgrown that even Patrice, who hikes in the area regularly, missed the path into the forest and the Twa led him back the correct way. Within a few minutes we were out of the tea and had entered forest canopy. The trees were large and ancient. It was like walking onto the set of Jurassic Park. The forest had a mystical feel to it and it was easy to understand why the Burundians had conserved it as a magical place. We would not have been surprised to see a brachiosaurus emerge from the greenery. The sounds of bugs, birds, and monkeys surrounded us. The forest is home to chimpanzees and colobus monkeys; unfortunately we didn’t see any that day. We did see giant, prehistoric-sized worms, slugs, and snails. We saw viper snakes, which Faye scooped up to take home with him. (He collects snakes to supply anti-venom to many of the hospitals in Bujumbura.) 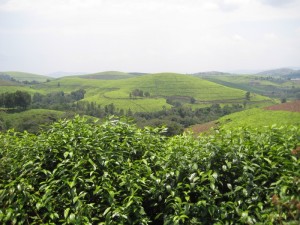 The location made this simple walk through the forest so special. We were walking through an area that few outsiders had visited even before the war. The forest, and Burundi in general, is not a place that many tourists think to go to; it doesn’t have the gorillas of neighboring Rwanda so it’s overlooked as a destination. Burundi is not well-developed but it is densely populated; the forest is one of the few unpopulated areas in the country. In the forest we felt free. Free from cell phones and televisions. Free from the traffic and pollution in the city. Tourists passing through meant economic freedom for the Twa, who, as the smallest ethnic group in the country, had been persecuted and chased away from much of the cultivatable farm and grazing land in other areas. Freedom meant different things to everyone on the walk that day. About the Author: Stephanie Smith Diamond is working on a memoir of her time in Burundi. She currently lives in Hyderabad, India, and is relocating to the United States this summer. She blogs at Where in the World Am I? Find her on Facebook. Photographs by Mike and Stephanie Diamond.