Do the Things You Believe You Cannot Do: NOW

During a Girlfriend Getaway in Grapevine Texas, I met Tammilee Tilson and learned about her project to do 40 new things before she was 40. I was so enthusiastic about her project that the other writers on the trip suggested I do it as well. I said, “I simply cannot.” They could not think of any reason why; I finally looked at them and said, “I am too old to do 40 things before I am 40.”

Since travelers are very adaptable, Kelly suggested I do 50 new things before I am FIFTY! I thought, “OH MY GOD! I am going to be 49!” At first I felt old, but later I felt energized. I am thrilled to be on this journey of writing, traveling and creating digital content. It is a perfect plan for me to find fifty new and adventurous things to try before I turn fifty in October of 2017.

I recently read Shonda Rhimes’ book, Year of Yes, where she describes how after her sister told her, “You never say yes to anything,” her entire life changed. Those six words changed her life. She realized that often “if they had asked me I would have said no.” Amazingly “if they had asked me if I wanted to sit in the presidential box with President and Mrs. Obama at Kennedy Center Honors, I would have said no.” Rhimes shares her decision that she announced by text on her birthday to a few friends:  “Am going to say yes to anything and everything that scares me. For a whole year. Or until I get scared to death and you have to bury me.”

I understand the fear. I often feel totally terrified but I do new things anyway. I love when Rhimes lists what her yes will include:

“Yes to everything scary.

Yes to everything that takes me out of my comfort zone

yes to everything that feels out of character

yes to everything that feels goofy

When President Halon from Dartmouth invites her to be the graduation speaker, it is a challenge but she does say YES! She tells the graduates: “Lesson One: Ditch the dream. Be a doer, not a dreamer.” You can think about making dreams come true or you can just get started!

She told the graduates:

You will feel alive, vibrant and excited!”

This is what I want for my 49th year, I want to say yes and feel alive, vibrant and excited. I loved when Rhimes talked about luck. 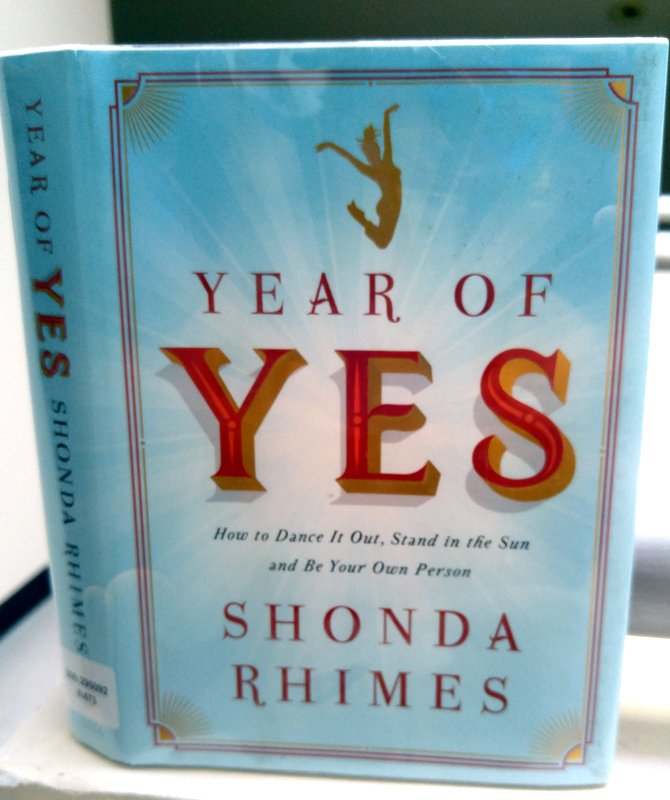 “I am not lucky. You know what I am? I am smart, I am talented, I take advantage of the opportunities that come my way and I work really, really hard. Don’t call me lucky. Call me a badass.”

I agree with Rhimes: I am not lucky, I am a very hard worker who turns over every stone and creates paths for myself. I look forward to a year of great adventure.

Rhimes explained that: “I am only just beginning to understand that the very act of saying yes is not just life-changing, it is lifesaving. I can experience life or I can give up on it. Saying yes is courage. Saying yes is life.” I am looking forward to my 50 new and adventurous things and saying yes to myself and yes to life!

I love when Rhimes said: “Don’t apologize. Don’t explain. Don’t ever feel less than. When you feel the need to apologize or explain who you are, it means the voice in your head is telling you the wrong story. Wipe the slate clean. And rewrite it. No fairy tales. Be your own narrator. And go for a happy ending. One foot in front of the other. You will make it.”

I love that Rhimes felt

ADVENTUROUS
BRAVE
OPEN
and KINDER to herself and others

after her Year of YES! I cannot wait to get started!

I hope you will be inspired to say yes as well! My suggestion is to share a story in my Gratitude Travel Writing Award. I have published nearly 2000 writers from 75 countries. When I first began, I just hoped that 10 people would enter! It has certainly grown past my expectations. When I made my first video, I was thrilled when 100 people had seen my YouTube channel. Now I have over 1000 subscribers, 600 videos and nearly 750,000 views.

What will your first YES be?

2 responses to “Do the Things You Believe You Cannot Do: NOW”