Bangkok in the Raw 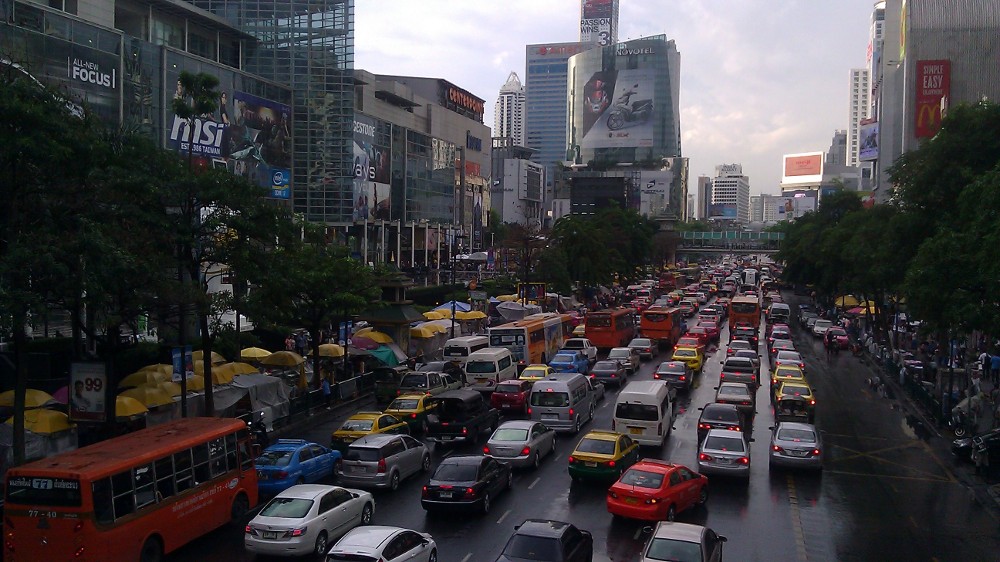 There’s no real reason to explain why I lost my mind one sunny afternoon in Bangkok.

Maybe it was a vitamin deficiency, a desperate plea for action, or perhaps just a deep longing to get under the tough skin of Thailand’s capital city.

Much like a scabby mosquito bite, Bangkok is an itch you already know shouldn’t be scratched. But digging in with dirty nails is just too tantalizing. Many travelers turn their backs on the city before they find the gold beneath the grime. Maybe because they’re clawing in the wrong places.

One of Bangkok’s motorcycle taxi drivers was lounging against his bike, smoking a cigarette. He was a young man, but like many drivers in Thailand, early wrinkles betrayed far too many hours of dodging death’s polluted tentacles in the madness that is Bangkok traffic.

I first spotted him while walking aimlessly along a street, like any other in Bangkok, strewn with cracked dreams and crushed cigarettes. Why I chose this friendly young man in the faltering afternoon light, I still don’t know. Chaos often comes swiftly and unexpectedly in Bangkok, sometimes without clear reason.

“How fast can you get me to the train station?”

The driver pondered my question for a moment, glanced at the clogged intersection where a masked traffic cop was futilely trying to cull chaos into movement, then answered:

He braced for the typical show of disgust at the first price offered; a negotiation was expected to ensue. On the contrary, I actually thought the price was more than fair for the amount of stress I was about to drop on this poor, unsuspecting soul.

“I’ll pay you double if you can get me there in 10 minutes.”

Now, technically, I didn’t lie to the young fellow. He could only assume that because I was in such a hurry that there was a rumbling train and one empty seat waiting to carry me somewhere – but that wasn’t the case. The only ticket I held was for a completely unjustified, potentially wild ride into the toothy maw of a machine that spits out more traffic-related casualties than any other city in the world; an optional tour of Bangkok’s most clogged arteries at high speed.

The driver’s half-finished cigarette bounced in a shower of orange sparks on the pavement. There was no need to verbally answer my dire offer. An expert kick sputtered our scooter to life.

I was barely seated before a throttle twist sent us careening into a vortex of rush-hour traffic. Horns honked and worried faces flashed by in near-disaster swerves. Without hesitation, the driver pointed our front tire at the sidewalk.

Much like the streets, the sidewalk was far from empty. Loose tiles hiding the horrors of Bangkok’s sewers clanked and rattled beneath us. Our horn was never silent. Businessmen fumbled mobile phones to dive for cover; dogs scurried. All sentient beings made way for whatever crazed mission we were pursuing. But no one shouted or complained. No curses or obscene gestures followed in our wake. In true Thai fashion, people even began helping us by urging pedestrians and carts out of the way upon our approach.

For a precious moment, Bangkok pulled aside the heavy curtains and allowed a peek into the hearts of the residents.

My driver was more exhilarated than scared. I caught a sly grin rather than a grimace in one of our mirrors. He was actually enjoying this. Our ride was no longer about the money or the mission. In a blurred, fast-moving microcosm, we were experiencing Bangkok in the raw. Our arrival was dreaded. Two human beings – complete strangers – were locked in an intentional struggle for survival; a dance with dire forces that gave us both a new appreciation for life in this juggernaut of a city.

We slammed to a stop at the entrance of the train station. Unable to give away the thrill just yet, the driver revved the engine with one bonus twist of his gloved right hand. At that moment, he was no longer just another faceless entity among Bangkok’s horde of drivers. No, this 20-something was a legend who had proven that he could indeed dance with the City of Angels and live to tell.

With trembling hands, I tipped the young man well. No words were spoken. Before speeding off, the driver – a stranger with whom I now felt a bond – gave only a helmeted nod and a crazed, burning look from two brown eyes that I’ll never forget.

It was the look of a man who is alive.

About the Author: In 2006, Greg Rodgers climbed out of the Rat Race and hit the open road.

The Allure of Costa Rica
An outing in Sri Lanka
Greece; A Timely Muse
The Queen whose name I did not know in El Salvador

2 responses to “Bangkok in the Raw”