Are You Weirdly Obsessed with Southwest Airlines?

Thank you Matt Melzer and Thrillist for allowing me

to share about how Southwest Airlines saved my trip!

There’s no charge to change a flight. So if you, like Los Angeles travel agent Lisa Niver, found that you’d booked a ticket in the wrong direction for a professional conference, you can change it without coughing up a $200 fee. When she realized the day before said conference she’d bought a ticket from Phoenix to LA instead of the other way around, she rebooked at the last minute at no extra cost.

“People don’t expect much of Southwest,” says Patrick Smith, a longtime commercial pilot and author of Ask the Pilot: Everything You Need to Know About Air Travel. “And of what they DO expect, they receive it reliably and consistently. Southwest is nothing if not unpretentious. They’ve mastered the art of get-what-you-pay-for satisfaction.” 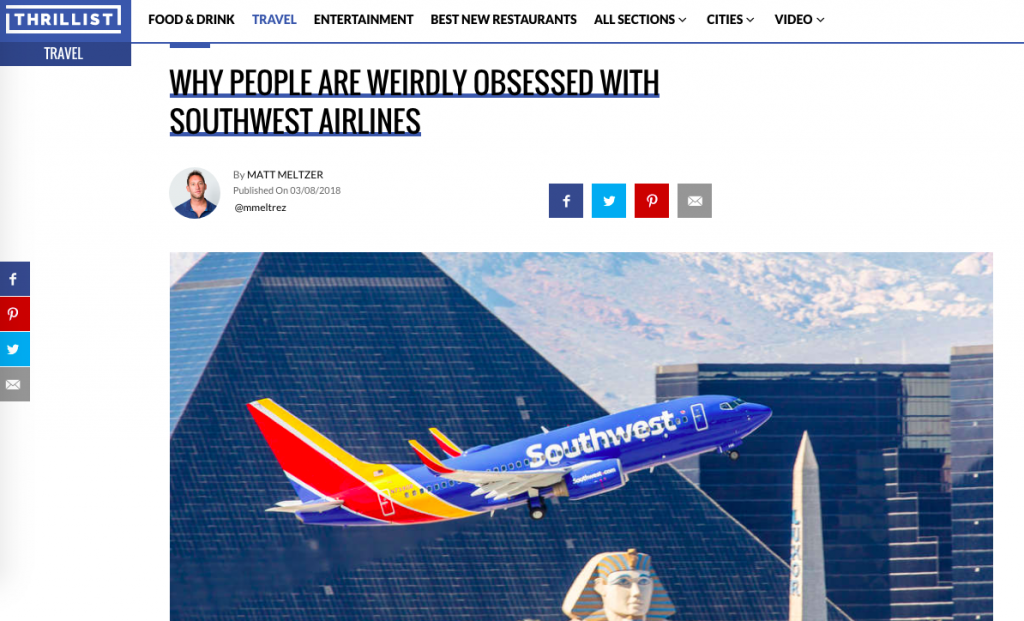 The benefits of happy, empowered employees extend beyond just free drinks. Reservation agents can, as they did for Mariah Muhlbradt of Boulder, Colorado, even waive large differences in base fare if you, say, booked a ticket on the wrong date for your best friend’s wedding, and only realize it the day before, when all the available flights are $500 more expensive.

“They can bend the rules when they need to,” says Lauren Tow, a Dallas attorney who says she’s flown the airline more than 1,200 times. “You just don’t see that in other airlines — there it’s all about policy and ‘sorry, we can’t do that.’”

At first glance, it might seem cutting customers big breaks for their own errors isn’t good for business. Instead, it breeds loyalty, which drives profits. And when we asked a handful of flight attendants what they’d do to improve the airline industry, they all agreed that giving passengers increased flexibility to change or cancel a flight — as Southwest has done — would go a long way in improving the flying experience as a whole for customers and FAs alike.

Are you ready to go TRAVELING?

One response to “Are You Weirdly Obsessed with Southwest Airlines?”