Antarctica: So You’ve Decided to go? Next Steps…

It’s been a lifelong dream, you’ve been inspired by the BBC’s Frozen Planet, you’ve just seen a friend’s photos from their trip or you are a frequent traveller who only has one continent left on their bucket list.  Whatever the reason, the decision has been made: Antarctica will be your next travel destination.

Antarctica is a continent like no other.  It is remote, costly and challenging to reach which makes it a ‘once in a lifetime’ adventure for most people.  So you want to get it right!  Once you have made the decision to go, you will need to ask yourself the following questions:

Unless you are a scientist, medic or other specialist who has secured a placement at a research station, or are wealthy enough to arrange your own private yacht, your transport options are limited.  Whilst some travel companies have introduced flight options to avoid the Drake Passage or for those who are short of time, the most common method of visiting Antarctica is a group tour via a ship.

The most common tour offered is an 11 day round trip from Ushuaia that crosses the Drake Passage towards the South Shetland Islands and the Antarctic Peninsula, before returning across the Drake again.  There are alternative tours that travel a little further south and the granddaddy of them all is the three week expedition that encompasses the Falkland Islands, South Georgia and Antarctica and only has one Drake crossing.  This is the one I chose and it provided an unbeatable combination of historical, wildlife and scenic highlights over a period of time long enough to allow me to completely soak up the experience I was having.  The decision you make will be influenced by your available time, budget and personal interests.

You will be limited to the Antarctic summer, where tours are offered between November and March.  Again, your decision will be influenced by your personal interests and there are no guarantees when it comes to the continent that plays by its own rules.  Some general guidelines are:

At the beginning of the tourist season, temperatures are likely to be at their coldest and polar ice is still breaking up which may limit access opportunities.  But landscape is often more pristine, undisturbed and breath-taking.  Whilst there are likely to be less whales at this time of year, the penguins will be finishing their mating season and nesting on their eggs.

During this period the days are at their longest and the daily temperature at its warmest.  This is the period where wildlife can be at its most plentiful with penguin chicks providing entertaining and endearing sightings.

This is the best time for spotting whales but it is likely that a lot of the other wildlife will have returned to sea.  Penguin chicks will be larger and have started to fledge and the temperature will start to drop again.  There may be better access to areas further south and you are more likely to experience rocky and muddy landings rather than snow.

But remember that nothing is guaranteed in Antarctica!  I went in late December and was spoilt with wildlife sightings, especially penguin chicks.  But ice that was not present in November prevented a landing at Elephant Island, after we had already had to change route as the South Shetland Islands were not accessible. 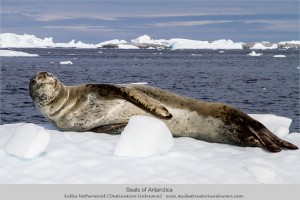 There are a number of tour companies that offer expedition cruises to the region and almost all have great reputations.  I travelled with Quark Expeditions and have nothing but great things to say about them.  I liked that they are polar specialists, have been running tours in the area for a long time and were as enthusiastic about my trip as I was.  Like any tour company decision, do your research and make the decision that suits you.  Your decision may end up being more influenced by the timing of a particular itinerary that you are interested in, the size of the ship or other factors.  The cost tends to be the same amongst the companies, although it’s worth looking out for specials throughout the year to reduce what is an incredibly expensive adventure.  It is also possible to pick up last minute deals in Ushuaia – we had a few passengers on board who had arrived in Ushuaia and booked the trip the previous day – but there is obviously some risk involved in this if you arrive and nothing is available.

So after making the initial decision to go, you have now confirmed how, where, when and with whom.  It doesn’t stop there!  You will find yourself asking a number of other questions as you plan your adventure and some of the most common include:

What clothes do I need?

Layers, layers, layers!  Remember, there is no such thing as bad weather, just bad clothing so instead of worrying about the weather, simply prepare for it.  Quark made it easy by provided us with a yellow expedition parka and waterproof boots, so I only had to bring my base and mid layers.  Moisture-wicking material is best and cotton is worse and you will definitely need waterproof trousers (I prefer the thin ones that you slip on over your trousers).  You will also want comfortable clothes for the ship, which is at a pleasant room temperature and possibly a nice outfit for the occasional party on-board. Don’t forget your sunscreen and sunglasses (polarised glasses make a great photography subject as an added bonus!) and pack a swimsuit to enjoy the Polar Plunge!

Will I get seasick?

The Drake Passage is infamous for being one of the roughest patches of sea in the world.  Likewise the section between the Falklands and South Georgia has been known to get quite rough.  But it’s a lottery, you just don’t know what conditions will be handed to you.  I came prepared with Scopolamine Patches which I took off after the first day as they gave me a hangover-like dry mouth and had me feeling fatigued and prescription sea-sickness pills, of which I took one and it unfortunately knocked me out for the day.  I was lucky that I only felt sea-sick once and we had relatively calm conditions for most of the journey.  Prepare for the worst and hope for the best.  There will be a doctor on-board for emergencies.

Where will I stay?

The ship will be your ‘mobile base camp’ for the duration of the voyage.  You will leave the ship for zodiac cruises and landings where possible.

What camera equipment should I take?

This completely depends on what type of photographer you are, but take something!  Even if you don’t usually take photographs when you travel, you will find yourself constantly snapping away at wildlife and landscape that needs to be seen to be believed.  I am a serious amateur and photography was one of the main focuses of my trip.  I travelled with a Canon 7D, 10-22mm wide-angle lens, 24-105mm and 100-400mm telephoto.  I found myself using the 100-400mm the most but I used the others enough that I am relieved I brought all three.  I decided against taking a tripod and didn’t regret it but there were some passengers on board using one.  I also brought a backup Canon 7D (which I bought used and am now re-selling at the same price) which proved invaluable when rain in the Falklands created a temporary issue with my main body.  There are no shops in Antarctica and the last thing you want is to be without your camera.

You will take more photos than you have ever taken before, so come prepared with sufficient memory cards and backup options.  I travelled with a portable hard drive and laptop and backed up on a daily basis.  Having the laptop allowed me to organise and review my shots in Lightroom along the way, identify things I was doing wrong and allowed me to correct them the next time I was outside shooting.  It was like being on a three week practical photography workshop!

Visiting Antarctica introduces you to feelings and emotions you didn’t know existed within you.  It calls out to your inner photographer, your inner writer, your inner musician, you inner scientist and your inner David Attenborough!  Not only does Antarctica allow you to disconnect from the outside world, it insists upon it.  There is so much to see and experience that there is no room in your thoughts for anything but the moment you are in

Antarctica is a drug – and I am now addicted.

Kellie shares her experiences to inspire others at Destination Unknown and has has a section featuring Antarctica travel stories, tips and photographs based on her recent adventure.

Antarctica: At Earth's End
Memorable Moments in Rwanda
See the World with Royal Caribbean
Top 5 Things To See and Do in Deception Island, Antarctica