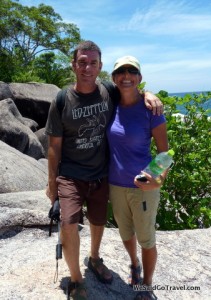 From September 19-23, 2012, we stayed at Sairee Beach at Pranee Guesthouse (500B $16usd with breakfast and fan). Our first two hikes were to Hin Wong Beach and Ao Leuk. See these on our video HERE

On Day 3 (September 23): We walked from Sairee Beach to Janson Bay, Sai Nuan 1, Sai Nuan 2, Chalok Baan Kao, and Thian Og Bay (Shark Bay). Each of the five beaches were nice but after our first two days at Hing Wong and Ao Leuk, I think those were nicest. I did like the secluded bay at Sai Nuan 2 and the name of the resort, Siam Cookies. Our hike included nearly half of Koh Tao and of course, it was the hottest day of our time in Koh Tao. I ran up two of the steepest hills at high noon! Who knew I could do that!

At lunch we met Nai from Burma and he taught us more Burmese words while we ate burgers and Pad See Ew at Fishy’s Burgers at Chalok Bay. Our final beach was Shark Bay or Thian Og Bay. It was pretty and had the best snorkeling of the day but that wasn’t saying much. We were happy to be in the water and have cooler temperatures for our walk back to Sairee Beach.

This movie is from our month stay in Thailand (September 2012) and our year TRIP in South East Asia, see all the videos from our trip: http://www.youtube.com/playlist?list=PLv_jKkCiDQcSdYAT6w0vpmlt71-tN16fZ&f… 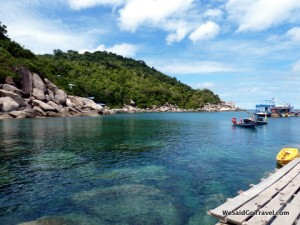 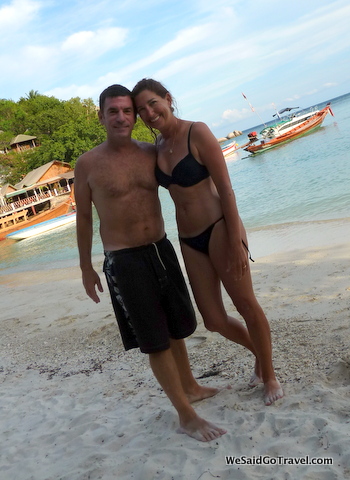 Tainan, Tawian for Passover (video)
Huffington Post Article: Regrets? Are You Living Your Best Life?
Are you wondering what to gift the Traveler on your list?
We Said Do Good: One Person Can Make a Difference! Will it be you?

One response to “5 Beaches: Hiking in Koh Tao”